The Larsen C Ice Shelf, Antarctica's Biggest, is Cracking Up

An iceberg the size of Delaware recently broke off from the shelf, and it could collapse entirely. 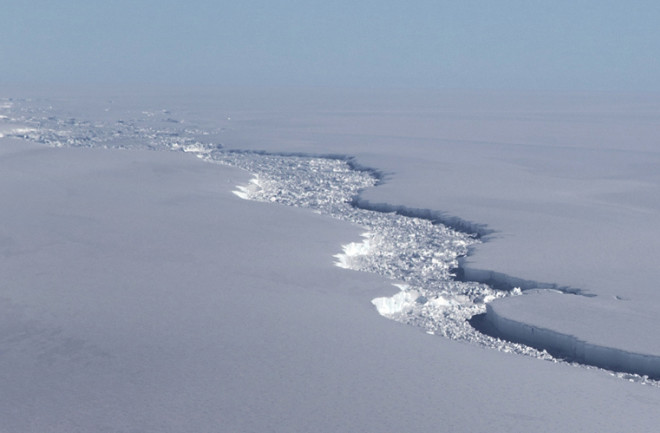 The narrow and mountainous Antarctic Peninsula extends north from West Antarctica some 800 miles toward Chile. This picturesque region has warmed at least twice as fast as Earth’s overall average. That’s led to the collapse of ice shelves. Larsen A, at the peninsula’s northern tip, crumbled in 1995. By 2002, its neighbor Larsen B collapsed. Both ice shelves were thousands of years old.

Since then, scientists have kept a close watch on Larsen C. It’s the biggest ice shelf on the peninsula and the continent’s fourth largest. A 70-mile-long crack is currently causing Larsen C to calve a Delaware-sized iceberg into the Southern Ocean. The mammoth iceberg — roughly 10 percent of the entire ice shelf — now dangles like a broken tree limb, tethered by just 12 miles of ice. “A calving event is expected soon,” Adrian Luckman of Swansea University said in mid-March. “My guess is days to weeks, but it could be months.”

Scientists see warnings of the chaos to come at Earth's poles. Discover's Eric Betz joined NASA aviators and researchers as they flew over Antarctica assessing the meltdown. Read his full account from the front lines of climate change.

Once this iceberg drifts into the ocean, the shelf behind it might collapse. That’s similar to what happened at Larsen B, which will likely disintegrate completely by 2020. However, NASA JPL ice shelf scientist Ala Khazendar cautions that Larsen C’s future remains uncertain. Ice shelves naturally shed icebergs, and this ice shelf could recover and avoid the fate of Larsens A and B.

If the floating Larsen C does collapse, it won’t raise sea levels directly. But once an ice shelf is gone, the glacier feeding it flows faster to the sea. And that will speed up sea level rise. Beyond that, scientists also worry what the collapse would mean for the rest of the continent as warming continues. “If the fourth-largest ice shelf in Antarctica disintegrates, bigger ice shelves with bigger drainage basins could also be in danger,” Khazendar says.