An animation of infrared imagery from the GOES-West satellite shows the Pacific Northwest being hit with a potent frontal system. An even more powerful storm, dubbed the "Ides of October Storm," is gathering strength out to sea behind it and is forecast to hit on Saturday night. (Source: Cooperative Institute for Meteorological Satellite Studies.) Even as a vigorous Pacific frontal system is moving through western Washington today, the remnants of Pacific Typhoon Songda are pulling together into an even stronger storm and charging headlong toward the region. It has been dubbed the "Ides of October Storm." And should it evolve on Saturday as forecast, Western Washington will "likely have its most significant windstorm since the Hanukkah Eve storm of December 2006, which left many people without power for several days," according to the National Weather Service. To be more precise, that Hanukkah eve storm stripped 1.8 million people of power in the United States, and it caused more than $250 million of damage (with another $80 million in Canada), according to meteorologist Bob Henson, writing in the new Category 6 blog at Weather Underground. https://twitter.com/NWSSeattle/status/786919995754188801 As the Ides of October Storm approaches the coast, it's central pressure is forecast to drop to about 970 millibars, equivalent to that seen in Category 2 hurricanes. For Seattle, rain and wind gusts up to 55 miles per hour are likey for Saturday night. Winds along the Olympic Peninsula coast could blow even higher, with gusts around 65 mph. 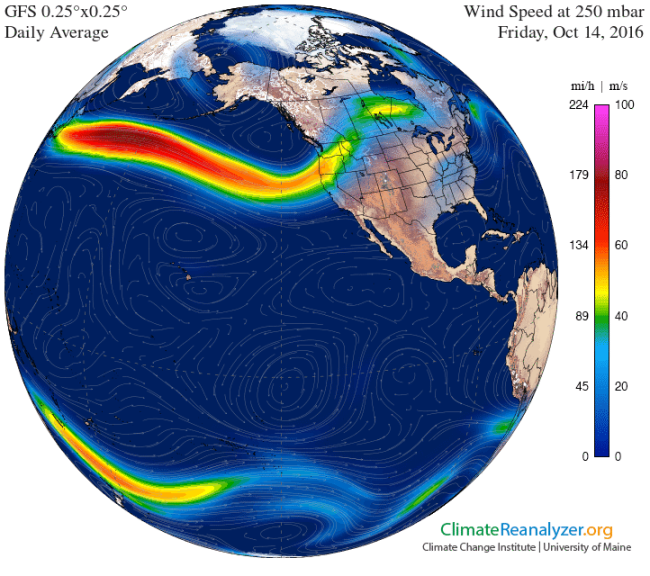 The forecast is for strong jet stream winds blowing above the north Pacific Ocean and into the Pacific Northwest. (Source: Climate Reanalyzer/University of Maine) Saturday's storm is riding along the edge of powerful jet stream winds, as seen in the graphic above. Over the weekend, the jet stream's peak winds at about 34,000 feet could reach 200 miles per hour. For a broad swath of the West Coast, rainfall totals could be very impressive, as seen in this 72-hour forecast graphic:

That elongated splotch of red and orange stretching from northern California up to Vancouver Island shows the forecast impact for the entire period of storminess. Note the X along the border between California and Oregon. Here the forecast is for 12.44 inches of rain over 72 hours. Also check out how the precipitation extends south along the Sierra Nevada mountains in northern California. Let's hope this first storm of the winter for the mountains is just one of many in the coming months. California needs all the drought relief it can get.