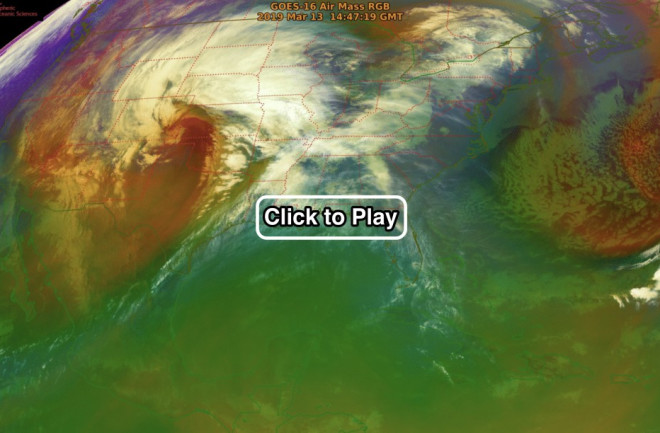 An animation of infrared imagery acquired by the GOES-16 weather satellite shows a strong cyclone spinning over southeast Colorado on March 13, 2019. (Source: CIMSS Satellite Blog) As I'm writing this at 11:30 a.m. on March 13, 2019, winds are gusting above 45 miles per hour, snow is blowing horizontally outside my patio window, and the lights in my home are flickering. I hope that I manage to get this story posted before the electricity goes out... Winter Storm Ulmer is intensifying over the High Plains and going through a process known as "bombogenesis." You can see its evolution today in the animation above, consisting of infrared imagery from the GOES-16 weather satellite. The false color scheme is known as "Air Mass RGB." Meteorologists use it to identify temperature and moisture characteristics of an air mass surrounding and within large storms like this one. In the animation, reddish areas are indicative of high "potential vorticity," which, as the name suggests, is related to the development of cyclonic features.

Bombogenesis happens when a mid-latitude cyclone like this one intensifies explosively, with the central barometric pressure dropping very rapidly. When this occurs, meteorologists often will call it a "bomb cyclone."

This phenomenon is a rare one for the landlocked region and has the potential to break all-time, low-pressure records for parts of Colorado and Kansas. Millions of people are under warnings for winter storm, blizzard and high wind.

There is preliminary word that the storm already has broken Colorado's record for all-time lowest atmospheric pressure, in records dating back to 1893: https://twitter.com/NWSWPC/status/1105819542272557057 Here's another view of the storm from space:

A view of the High Plains bomb cyclone acquired by the GOES-16 weather satellite in visible wavelengths of light. (Source: CIMSS Weather Blog) This closer view of the center of the storm is reminiscent for me of the kind of cyclonic motion you see in a hurricane. In fact, the storm features something that looks eye-like. And farther out on the plains in eastern Colorado, gusts have been forecast to top out at 80 miles per hour — a wind speed seen in Category 1 hurricanes. https://www.youtube.com/watch?v=vgqAGjncws0&feature=youtu.be Last but not least, the video above shows the view from my deck at about 11:30 a.m. Since then (and since I began writing this post), things have settled down slightly. And the lights have stopped flickering. But farther to the east, the storm remains a deadly threat. According to the Weather Channel:

All roads in the Nebraska Panhandle, more than 350 miles of interstates in Wyoming and parts of I-25 in Colorado are closed. Blizzard warnings have been posted for portions of the northern and central High Plains, from northeastern Colorado into eastern Wyoming, southeastern Montana, western Nebraska, western and central South Dakota, central and eastern North Dakota and northwest Minnesota.

I'll be glad to see the back of this winter, that's for sure!