The four warmest Januaries documented in the climate record have all occurred since 2016. 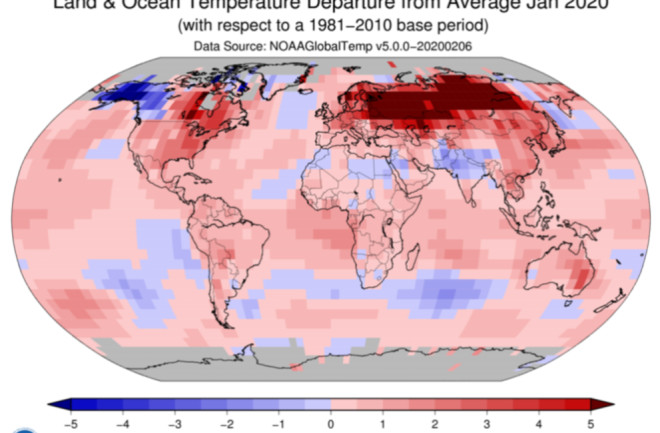 Here's is how temperatures around the world differed from the long-term average in January. (Source: NOAA/NCEI)

Last month was the warmest January in 141 years of climate records.

That's according to the latest analysis from scientists at NOAA’s National Centers for Environmental Information.

As the angry, oblong red splotch in the graphic above shows, the abnormal warmth was particularly concentrated in Russia and parts of Scandinavia. Eastern Canada also was particularly warm. In these areas, temperatures were at least 5.0 degrees C — that's an alarming 9.0 degrees F — above average.

There are a number of other ways in which global warming in January 2020 stands out, according to NOAA:

As Alaskans are probably well aware, and as the deep blue splotch in the map at the top of the post shows, the state was particularly cold last month. In fact, it was the coldest January in Alaska since 2012. But that blue sits in a sea of mostly pink colors, indicating temperatures that were warmer than average. And no land or ocean areas had record-cold temperatures in January.

NOAA isn't the only U.S. agency to produce monthly climate reports. NASA should publish its own, independent analysis soon.