2019 Had Second-hottest Spring in Over a Century

The globe just experienced its second warmest March through May since at least 1880. 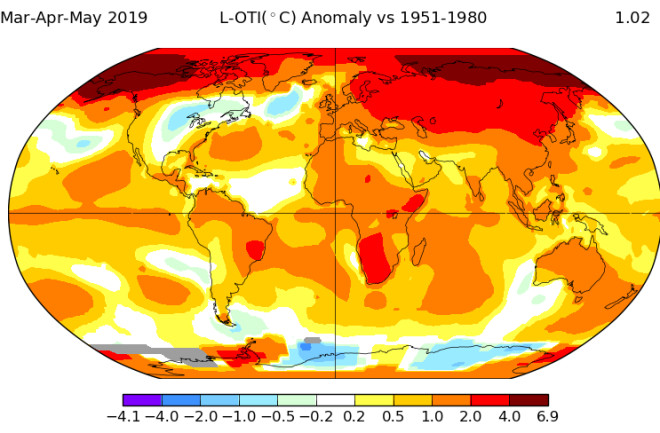 Overall, the global mean temperature during March through May was 1.02 °C warmer than the 1951-1980 average. This made it the second warmest such period in records dating back to 1880. (Source: NASA GISS)

March through May — spring in the Northern Hemisphere — was the second warmest such period in records dating back to 1880, according to a new analysis out today from NASA.

On its own, the month of May was third warmest.

The map above shows how temperatures around the world varied from the 1951-1980 average during March through May. A swath of territory in North America stands out amidst the yellow, orange and red colors that dominate the map. It was one of the very few places on Earth with cooler than average temperatures.

Meanwhile, the high latitudes continue to warm more intensely than other regions, with Alaska, parts of Canada and northern Siberia standing out as being extremely warm. That’s clearly visible in the anomaly maps above.

Most recently, torrid temperatures as much as 40 degrees above normal over Greenland caused about 45 percent of the island’s giant ice sheet to experience melting at the surface.

The Arctic’s floating lid of sea ice is suffering as well.

Of course, even three months of global temperature readings do not add up to a long-term trend. But what we saw during May through March is very much part of the long-term trend of human-caused warming:

The graph above shows how temperatures over the land and oceans have departed from the 1951-1980 average from 1880 to the present.

The solid black line shows NASA’s estimate for the global annual mean. The solid red line uses a statistical technique to smooth out shorter-term variations so the long-term trend can be seen more clearly. And the gray area shows the degree of uncertainty in the estimates.

Moving forward, it will be interesting to how see the rest of 2019 unfolds.