The first breathtaking images are in from Cassini's close encounter with Enceladus, Saturn's 'geyser moon' 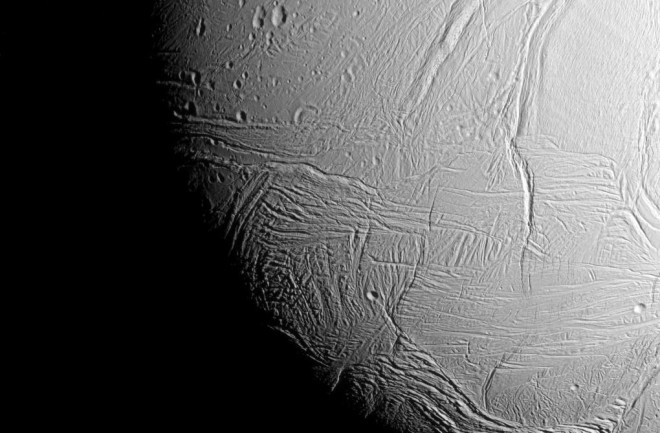 The south polar region of Saturn's active, icy moon Enceladus awaits NASA's Cassini spacecraft in this view, acquired on approach to the mission's deepest-ever dive through the moon's plume of icy spray.(Source: NASA/JPL-Caltech/Space Science Institute) As NASA's Cassini spacecraft dove toward Enceladus on October 28, its cameras captured a trove of visual data — and today, the first images have reached home. I think you'll agree that they are truly breathtaking. Cassini captured the image above from an altitude of 38,000 miles above the surface of the icy planet. The spacecraft was racing toward the south polar region of Saturn's moon, located below the wavy ridge-like features toward the bottom. And here's what it saw as it skimmed just 77 miles above that surface:

The Cassini spacecraft captured this view of the icy, rugged surface of Enceladus as it raced by just 77 miles (124 kilometers) from the surface. (Source: NASA/JPL-Caltech/Space Science Institute) Outstanding! This image resolves features as small as 49 feet across. By my very rough reckoning, that's a bit smaller than my house. It's also worth mentioning that the folks at NASA's Jet Propulsion Laboratory had to do some fancy image processing to minimize the smearing effect caused by the spacecraft's fast motion. One of the goals of the Cassini's close encounter with Enceladus was to take its deepest dive yet through plumes of ice, water vapor and organic molecules thrown high by geysers on the moon. The following image appears to show those plumes (although NASA did not spell that out in its caption that accompanied the image):

Glowing plumes of spray appear above to jet from the dark surface of Enceladus in this unprocessed image acquired by the Cassini spacecraft on Oct. 28, 2015. (Source: NASA/JPL-Caltech/Space Science Institute) In research published just this past September, scientists said they had confirmed that a global ocean lies beneath the icy surface crust of Enceladus. It's also likely that hydrothermal vents exist on the ocean floor too.

Source: NASA/JPL-Caltech On Earth, oases of sea life thrive around hydrothermal vents on the ocean floor. Here, chemical reactions in the hot, mineral-laden water in the vents provide the energy source for microbes that can survive in complete darkness. In fact, one theory is that life on Earth originated in vent environments like this. (Click the artist's rendering at right for a cutaway diagram of the interior of Enceladus.) Do seafloor vents on Enceladus harbor some form of life? Cassini's swooping dive through those geyser plumes spewing from cracks on the moon's surface likely will not answer that question. But once the data from Cassini are crunched, scientists may well gain new insights about how habitable the ocean environment is within Enceladus. As Cassini sped away, it looked back and acquired this achingly beautiful image:

Following a successful close flyby of Enceladus, the Cassini spacecraft captured this beautiful image of the icy moon with Saturn's rings beyond.(Source: NASA/JPL-Caltech/Space Science Institute) The crescent "geyser moon" seems to float above Saturn's rings. The spacecraft was about 106,000 miles away at the time. Cassini launched in 1997 and entered orbit around Saturn in 2004. Ever since, it has been studying the giant planet, its rings, moons, and magnetic field — becoming one of the most successful interplanetary probes ever launched.