The Doomsday Clock in Fiction and Reality 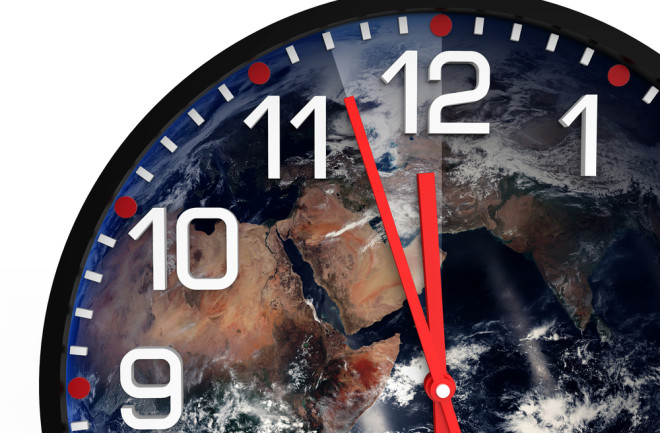 (Credit: Bank Artist/Shutterstock) A nuclear-armed Pakistani aircraft crashes just over the Indian border and the situation is about to spiral out of control. In Washington D.C., nuclear physicists and geopolitical analysts belonging to the Bulletin of the Atomic Scientists are meeting to decide whether to advance the “Doomsday Clock” ahead by two minutes. The Doomsday Clock is a symbolic representation of the level danger on planet Earth, and moving it ahead two minutes would take it to two minutes before midnight — two minutes before the end. This fictional scenario played out on a recent episode of Madam Secretary, but the Clock has been used as a snapshot of the dangers we face for well over five decades. But how do the hands on the Clock tick?

What Time Is It?

Since its creation at the dawn of the nuclear age, the Clock has been reset 21 times, but the only other time that it ever moved as close as two minutes to midnight was 1953. That was after the United States and Soviet Union both tested fusion weapons, or "H-bombs", within nine months of one another. The Doomsday Clock has been around since 1947, when the front cover of the Bulletin featured the first Clock drawing with the time set at seven minutes before midnight, basically for aesthetic considerations of the artist, Martyl Suzanne Schweig Langsdorf. Since then, midnight has stood as a metaphor for nuclear annihilation, but things got more complicated in 2007 when “Doomsday” was expanded to include non-nuclear disasters, such as irreversible climate change. The Bulletin’s stated reason was to enable the Clock to be used to address the urgency of acting sooner on climate rather than later, and the Clock was advanced 2 minutes, from 7 to 5 minutes before midnight. It was a move that was given high publicity by renowned cosmologist, and Bulletin board member, Stephen Hawking, who said:

As scientists, we understand the dangers of nuclear weapons and their devastating effects, and we are learning how human activities and technologies are affecting climate systems in ways that may forever change life on Earth…As citizens of the world, we have a duty to alert the public to the unnecessary risks that we live with every day, and to the perils we foresee if governments and societies do not take action now to render nuclear weapons obsolete and to prevent further climate change.

Working climate change into the machinations of the Clock was a broad declaration, not an adjustment based on specific developments. Moreover, while a worldwide agreement to limit climate change was cited, together with positive developments in nuclear politics, as a reason for moving the clock backward by 1 minute in 2010, the Bulletin did not move the Clock backward in 2015 when the US came to a major agreement with China to reduce carbon emissions substantially. Instead, that year the clock was advanced – for nuclear reasons, but also due to a lack of global political action on climate — raising the question of whether Bulletin cherry-picked the data for the equation.

Gears of the Doomsday Clock

Not that there really is an equation. The Doomsday Clock is a teaching tool to help educate society on how developments around the planet can put the survival of humanity in jeopardy. For roughly the first two decades, moving the clock was the decision of one man, Eugene Rabinowitch (1901-1973), biophysicist and cofounder of the Bulletin.

(Credit: Wikimedia Commons/Fastfission) Subsequently, the decision fell into the hands of a board of experts that would come to a consensus for an appropriate time setting based on global trends. This is how it is done today, and board members are experts in fields like nuclear physics, nuclear policy and international relations. But there’s no equation that can be subjected to peer review. It’s purely a judgment call by very smart people, many of them scientists. It’s an activity of scientists, but it’s not necessarily science.

That distinction came out full force in a recent episode of Madam Secretary, when the protagonist, Secretary of State Dr. Elizabeth McCord (Téa Leoni) is told by White House Chief of Staff Russell Jackson (Željko Ivanek) that she should have her staff “get into it with the Bulletin people, see if you can put the brakes on this ‘moving up the clock’ business.” McCord remarks, “You can't lobby scientists,” to which Jackson responds, “You can lobby anyone. It's the great equalizer.” Jackson is correct. Scientists can be influenced on what sort of public statements they make and this comes up when Department of State staff members suggest to the “Bulletin people” that the government budget for science and nuclear security “would shrink considerably if the opposing party were to take office.” The major lesson of the Madam Secretary episode is that adjustment of the Doomsday Clock does not come from a single event, no matter how positive or negative. After the attacks of September 11, 2001, the Bulletin did not adjust the Clock, but by the next year the growing threat of terrorism led the US to discuss withdrawing from the Anti-Ballistic Missile Treaty. This, plus global terrorism and the war in Afghanistan led to an adjustment from nine minutes up to seven. Similarly, even the Cuban Missile Crisis of 1962 did not cause a shift in the clock. Instead, over the next year, it led to a new treaty limiting nuclear tests in the atmosphere, and this caused the minute hand to move back. At the end of the episode, the fictional war between Pakistan and India is averted through tough diplomacy, and so Department of State officials are surprised to learn the Bulletin has nevertheless decided to move the Clock ahead by one minute. That put the time at three minutes before midnight in the Madam Secretary universe. It’s also the current setting of the Doomsday Clock today in the real world.