The Beastly Blob That Ate Kansas (Not to Mention Missouri, Arkansas and Tennessee Too) 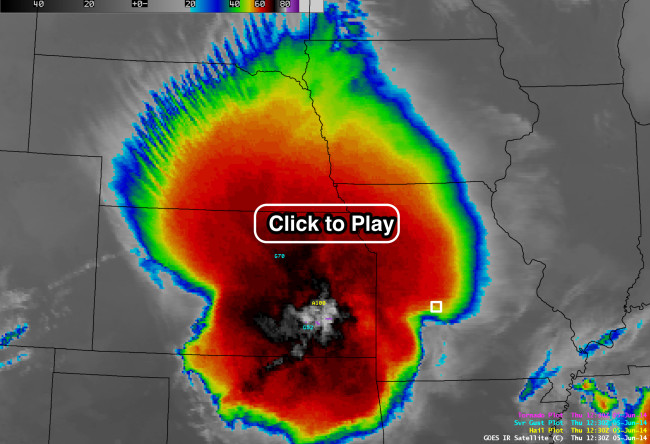 The growth of a large system of thunderstorms called a "mesoscale convective system," or MCS, is seen in this animation of infrared images from the GOES-13 weather satellite as the system moved across Kansas and into the Mississippi River Valley on June 5th, 2014. (Source: Cooperative Institute for Meteorological Satellite Studies) Last Thursday I shared dramatic imagery of a massive cluster of thunderstorms that moved across a large portion of the Central United States. At the time, I knew the folks at the Cooperative Institute for Meteorological Satellite Studies would weigh in with more spectacular visualizations. Now they have, so I thought I'd share some of them with you. But before I get into the details, I should note that the National Weather Service forecast is for continuing meteorological mayhem:

An active weather pattern is forecast to continue across the central Plains and into the Deep South with a stationary front in place through the weekend. Disturbances aloft, along with an abundance of moisture and instability in place, are expected to result in the development of multiple mesoscale convective complexes, or MCSs. These will be capable of producing localized flash flooding and severe weather.

Back to the imagery... The screenshot above is from a CIMSS animation showing last Thursday's beastly blob — technically known as a "mesoscale convective system," or MCS — as it blossomed over Kansas in the early morning hours of June 5th and moved into the Mississippi Valley. As you watch the animation look for the colored letters and numbers that briefly flash on and off as the storm system moves east. These are color-coded reports of tornadoes (pink), severe wind gusts (blue), and hail (yellow). In the screenshot above, also note the bristle-like pattern on the upper left periphery of the storm system. These are filaments of cirrus cloud (known as transverse banding) that formed in a portion of the storm system predominantly over Nebraska. They are indicative of a significant potential for turbulence at high altitudes. (Let's hope no airplanes were flying through that area at the time!) 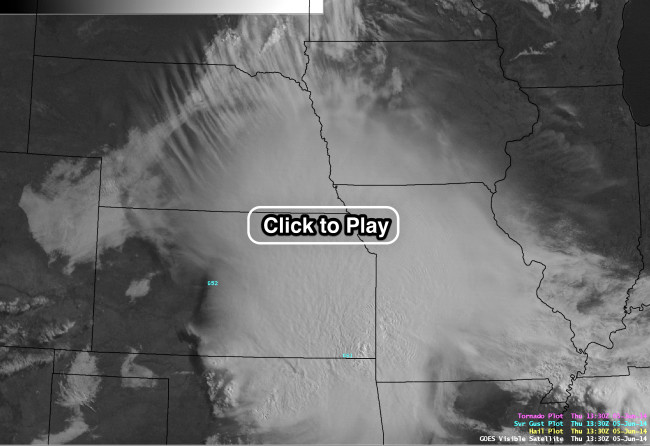 A screenshot from an animation of visible light images captured by the GOES-13 weather satellite shows the storm system as it moved to the east. (Source: CIMSS) You can see the same cloud filaments in this animation of GOES-13 weather satellite images. This one shows the storm system in visible light instead of infrared. Also evident is a cloud-top texture that looks cauliflower-like. Here, the energy of storm system updrafts has propelled moisture-laden air so high that it has punched right through the troposphere, the layer of the atmosphere closest to the surface, and up into the stratosphere. These are known as "overshooting cloud tops." The post from the folks at the CIMSS includes more imagery and animations covering other phenomena observed in this spectacular storm system, including gravity waves that propagate away from the overshooting cloud-tops, and thousands of lightning strikes. So if you're a weather geek like me, make sure to check out their post here. And then come right back for this:

Sorry, but I just could not resist...