It's been 100 years since the launch of the Appalachian Trail. Author Phil D'Anieri celebrates its legacy through the eyes of the people who hiked it. 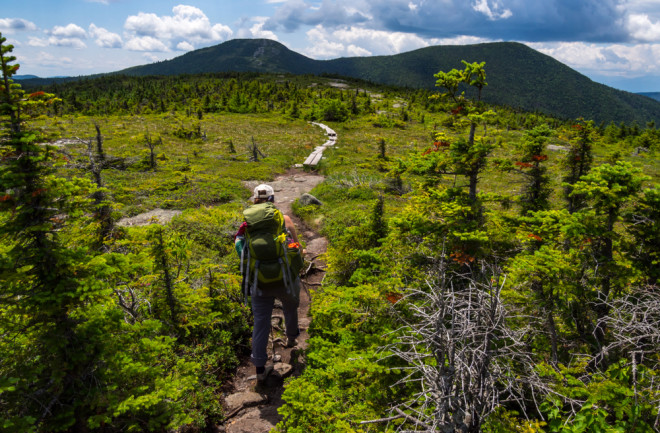 Hiker on Appalachian Trail in Maine (Credit: Jonathan A. Mauer/Shutterstock)

The Appalachian Trail (AT) continues to be a crowd-pleaser, attracting more than three million visitors each year. Stretching from Maine to Georgia, the scenic trail is considered the longest hiking-only trail in the world (2,192 miles, or 3,527 kilometers to be exact). Since its conception in 1921, the footpath has not only become a bucket-list topper but also home to important ecosystems.

2021 marks the 100-year anniversary of the Appalachian Trail’s launch. To celebrate, Discover caught up with Philip D'Anieri, author of The Appalachian Trail: A Biography. According to D’Anieri, a current lecturer on the built environment at the University of Michigan, the Appalachian Trail acts as a portal into another world. His books provides glimpses into this world by profiling intriguing characters hiking the trail, like "Grandma" Gatewood, a mother of eleven who completed the entire trek at the age of 67. D’Anieri shared with us not only the trail's rich history, but also her thoughts on our symbiotic relationship with nature and how the trail (and, ultimately, nature itself) shapes us, and vice versa.

Q: If you had to sum up The Appalachian Trail in a few sentences, what would you say?

A: The question that the book asks and tries to answer is where did the Appalachian Trail come from and why does it attract our attention. The answer that I share with readers is that the trail comes from the people who built it, and what those people wanted out of nature. So what I’m trying to do is characterize this place as a place that we have built for ourselves — a place to get away.

Q: This year marks the 100-year anniversary of the Appalachian Trail’s launch. Could you tell us a little bit about the history of the trail, including why it was constructed and how it has evolved over the years?

A: The trail has really had several different identities even over its 100 years. It was conceived to be one thing in 1921 when the article proposing it was first published [by Benton MacKaye.] It was built as something else altogether about 15 years later and it has evolved into a third or even a fourth version since then.

The first version that MacKaye proposed in 1921 was that we could create a cluster of small camps or backwoods places for a few folks to live, and for a lot of folks to come visit, that would model a different way of living. These communities would be connected by a trail that was surrounded by a lot of protected forests. Well, what actually got built was much smaller and literally narrower. It was a trail that ran from Maine to Georgia over 2,000 miles, but just the hiking trail and not an alternative style of living or the massive forest preserves that MacKaye had hoped for.

In the post-World War II period, it evolved into a national park. The trail was being threatened by development in the backwoods and on the mountain tops. The federal government stepped forward and said we’re going to turn this into a national park that protects the trail and makes it available to everybody.

If you jump ahead to the 21st century, the AT is now one massive Instagram backdrop. It’s a place for people to go out and create an online persona for themselves. So, it’s one place but it has shifted meanings over the years.

Q: What inspired you to write about or take an interest in the Appalachian Trail? Have you hiked the trail yourself?

A: What inspired me wasn’t hiking on it. I did more hiking on it after I started working on the book. What inspired me was growing up in the Eastern U.S., you frequently come across this Appalachian Trail. You’ll be driving down a highway and you’ll see a bridge going over it — it’s a pedestrian bridge — that says Appalachian Trail, or you go to a very popular national park and there is this trail. So, it’s this sliver of backwoods nature that snakes its way through the very built-up Eastern part of the U.S. and every time you encounter it, it’s almost like you’re seeing this portal into another world. Here’s this tunnel of nature that’s weaving through the built-up world that we are used to. That idea of a portal to another world would always be stuck in my brain as I’d drive past the trail or encounter it somewhere and I was curious to know where it came from. Some books were out there on the history of the trail but not quite the one that I’d hope to write.

Q: In your book, you profile key figures like Grandma Gatewood, a mother of eleven who hiked the trail in canvas sneakers and a drawstring duffle. What are some takeaways on the hike itself and why people choose to embark on it?

A: There are nine chapters in the book, each that focus on different individuals and sometimes a couple of individuals. All of them came to the trail for different reasons, and made different things out of it. To me, what’s interesting is that it’s this one place but there's a diversity of people and ideas about nature that call people to it. For as many different individuals as there are here, there are different versions of why they were fascinated by the trail, why they wanted to help build it and why they wanted to protect it or hike on it. The takeaway is that the trail is for lots of different people, it’s for lots of different kinds of hikes and it’s not any singular thing.

Q: What advice do you have for anyone that wants to hike the trail?

A: I think that anybody that wants to hike the Appalachian Trail should and, in most places, it’s a very easy thing to do. The trail was built where it was because it’s close to major population centers. So from New York or Philadelphia or Boston or Washington or Atlanta, you can get to the trail in a couple of hours and you can go walking on it. In most places on the trail, you want to be reasonably well-informed on what kind of terrain you’re going to encounter and wear proper hiking gear. But the parts of the trail that require really demanding backwoods skills are fairly limited. So, my advice is to learn about where you’re going and then by all means go. Don’t be intimidated by the big name attached to the Appalachian Trail. In most parts of the trail, it's just a trail through the woods that is available to all of us.

Q: How do you think this trail has influenced our attitudes about nature conservation over the years?

A: I think the trail provides an opportunity for people to get out of their everyday lives and connect with a more natural reality that can’t help but change our perspective on the world a little bit. The AT isn’t the only place to do that, but it is still a great place to do that. At the same time, the Appalachian Trail isn’t purely a nature reserve. It has the shape that it does and it has the facilities that it does because it's built to make the woods accessible to us. So, there are shelters, there are parking lots and groomed trails where the trees have been cut down. It’s a portal or a means of access to a more natural world and that’s what attracts people to it and encourages them to preserve it.

Q: How has the trail helped facilitate research about different ecosystems?

A: Because the Appalachian Trail is a protected corridor, it does provide a unique environment for research that cuts through vast territory. It's a line over the mountain tops and through the woods that is all connected and protected. That has allowed for biologists and ecologists to do certain kinds of studies that they wouldn’t otherwise have been able to.

Q: What do you want people to ultimately take away from this book?

A: I hope people take away an appreciation for not only how nature can shape us when we go to places like the Appalachian Trail but at the same time how we have shaped places like the Appalachian Trail to serve our needs for what we get out of nature. It’s a symbiosis. It’s not pure nature. It’s not purely built. It’s a building of a natural environment to serve our needs and that story of building the natural environment is what I found fascinating about the whole thing.