The 2021 Atlantic Hurricane Season Was a Doozy

The season was more active than normal for the sixth year in a row. 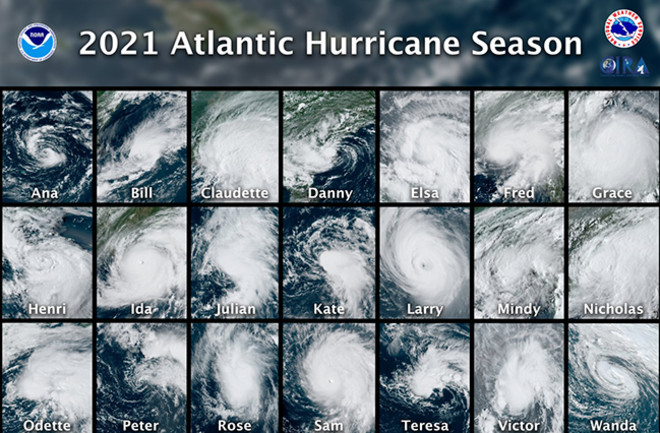 The Atlantic Hurricane season officially came to a close today, and statistics just released by NOAA show that it was unusually active.

All told, of the season's 21 named storms, seven were hurricanes, and four of these had winds of 111 miles per hour or greater, qualifying them as major hurricanes.

During an average Atlantic season there are three major hurricanes.

For the record: A storm gets an official name when its winds reach 39 mph or greater. To qualify as a hurricane, it must reach 74 mph or more.

In terms of named storms, 2021 was the third most active year on record, according to NOAA. The year also ends as the sixth in a row with above-normal Atlantic hurricane activity.

As with last year, 2021 exhausted the list of 21 storm names — and that's the first time this has happened for two years running. This past year also was the seventh consecutive season with a named storm forming prior to the official start of hurricane season on June 1.

Hurricane Sam churns in Atlantic Ocean early on October 3rd, 2021, as seen by the GOES-16 weather satellite. By a metric known as Accumulated Cyclone Energy, or ACE, Sam was the most energetic hurricane of the 2021 season. (Credit: RAMMB/CIRA)

By a metric called Accumulated Cyclone Energy, 2021 was particularly active. ACE takes into account both the strength and duration of a storm, not just its strongest winds, and it is given as an index. An above normal ACE index is greater than 126.

According to the ACE metric, the most energetic storm of the season was Hurricane Sam, seen in the satellite image above. It lasted as a named storm for 12 days, as a hurricane for 11 days, and as a major hurricane for an astonishing 7.75 days. Sam ran up an ACE index of 53.8, the fifth greatest ACE of any Atlantic hurricane on record.

Counting all 2021 storms, ACE "was above-average all season long, and blew past a full average season's total on September 28th — it ended up at about 141 percent of average (using 1971-2020 as the baseline climatology)," writes Brian McNoldy, a researcher at the University of Miami's Rosenstiel School of Marine and Atmospheric Science.

For 2021, ACE was above 129 units for the sixth consecutive year — "this has never happened before," according to McNoldy, "not during the satellite era, not since records begin in 1851. This sustained level of tropical cyclone activity in the Atlantic is unprecedented even for four years, let alone six!"

As seen in this animation of GOES-16 weather satellite images, Hurricane Ida made landfall in Louisiana on Aug. 29, 2021 with sustained winds of 150 mph. (Credit: RAMMB/CIRA)

The most destructive Atlantic Hurricane of 2021 was Hurricane Ida, which charged ashore along the Louisiana coast in late August with sustained winds of 150 miles per hour. That tied Ida for the fifth-strongest landfalling hurricane to hit the contiguous United States on record. It was also the second year in a row that a Category 4 hurricane hit Louisiana.

Ida killed at least 96 people. Damages are estimated to have exceeded $60 billion. That means the storm will be ranked among the top-five most costly U.S. hurricanes on record. (NOAA will release a final accounting of Ida's costs after the end of the year, and they almost certainly will be higher.)

The Levees Held, But Many People Still Suffered

Ida struck New Orleans exactly 16 years to the day after Hurricane Katrina flooded the city. This time, the levees held, thanks to billions of dollars invested after the Katrina calamity to reinforce the city's defenses. But as Tufts University researchers Marina Lazetic and Karen Jacobsen point out in The Conversation, only part of the population wound up protected. "A strong similarity between Ida and Katrina still emerged," they write. "Low-income communities and communities of color remain at high risk from hurricanes."

After it churned through Louisiana, Ida wasn't done causing mayhem. Its remnants moved up the U.S. east coast, combining with another storm system and producing calamitous — and lethal — flooding across parts of Pennsylvania, New Jersey and New York.

In just one hour, New York City was deluged with more than 3 inches of rain, making this the wettest hour in city history. City streets and subways were completely inundated.

Ida's carnage, and the overall damages from 2021's hurricane season, will be added to the overall record of U.S. weather and climate disasters. That record shows that between 2018 and 2020, there were 50 of these disasters in the United States producing losses exceeding $1 billion, according to NOAA. And between 1980 and 2020, weather and climate disasters cost the United States approximately $1.875 trillion.

What accounts for the heightened hurricane activity in particular during recent years? Part of the answer is the warm phase of a phenomenon known as the Atlantic Multidecadal Oscillation. This warm phase began in 1995, and it is known to favor more, stronger, and longer-lasting storms.

And operating in the background was human-caused climate change. According to the Sixth Assessment Report from the Intergovernmental Panel on Climate Change, the proportion of tropical cyclones globally that reach the most intense levels — meaning equivalent to Category 4 and 5 — is expected to increase as the planet continues warming. Peak winds and rainfall also are projected to increase.