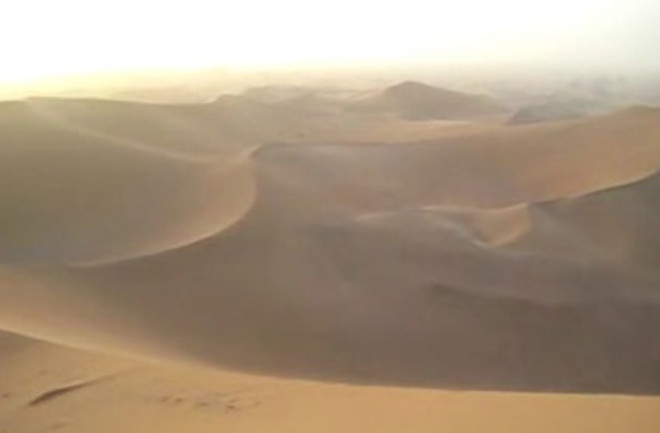 It's such a fertile time in the green technology sector, solar power plants may soon begin reproducing. Using two resources that the Sahara has plenty of, sun and sand, the Sahara Solar Breeder Project hopes to build factories that will refine the sand's silica into silicon. That silicon will be used to build solar panels, which will power more silica-refining and solar panel factories, which will be able to build more solar panels, and on and on and on. The potential for exponential growth allows for some extreme optimism: The project's leaders say they could build enough power stations to meet half of the world's energy needs by 2050. Project leader Hideomi Koinuma believes the project is key to solving the world's energy crisis, saying:

"If we can use desert sand to make a substance that provides energy, this will be the key to solving the energy problem. This is probably doable. Moreover, the energy we continually receive from the Sun is 10,000 times the energy currently used by mankind. So if we can utilize 0.01% of it skillfully, we won't have a shortage of energy, but a surplus." [DigInfo TV]

Hit the break for a video about the project.The Sahara desert is about the size of the United States, but instead of being full of people and farms and towns the Sahara is almost empty of everything. Everything except sand, that is. Three and a half million square miles of it.

"From the viewpoints of quality, quantity and chemistry, Sahara sand is hard to beat for use as silicon for solar cells," [Koinuma] says. [New Scientist]

Though Koinuma is bursting with enthusiasm, desert sand has never been used to produce silicon-based solar panels before, so the team will have to perfect that technology first. Once they start building factories, they'll have to cope with environmental hazards in the desert like sandstorms and shifting dunes. If all of those endeavors are successful, the energy produced by the station will still need to be transferred from the desert to areas that need it, which requires superconducting power lines kept cold by liquid nitrogen--a technology which is difficult to handle in the best of circumstances, let alone in the middle of the empty desert. Koinuma believes the superconducting lines would be cost-effective, though another company called the Desertec Foundation

is working on the same problem with a different approach.

"There is not really a need for superconductors. By using high-voltage direct current transmission lines it is possible to transport clean power from the deserts over long distances to centres of consumption," says the Desertec spokesman – adding that the technology is already used in dozens of projects worldwide. "Transmission losses are fairly low – around 3 per cent per 1000 kilometres. Unlike superconductors, there is no need for cooling, while power transmission costs are just 1¢ to 2¢ per kilowatt-hour." [New Scientist]

It will be interesting to see how the two projects play out--in the Sahara, there's plenty of room for competition. The Sahara Solar Breeder Project is currently supported by Japan's International Cooperation Agency and Science and Technology Agency, universities in Algeria, and the International Research Project on Global Issues, which is providing funding for the problem-solving phase--a little over a million dollars a year for five years. Here's the in-depth video from DigInfo TV

80beats: Europe’s Plan to Draw Solar Power From the Sahara Moves Ahead

80beats: A Solar Power Plant in the Sahara Could Power All of Europe

DISCOVER: Introducing the Most Efficient Solar Power in the World