Meet Shreya Ramachandran: This high school senior founded a nonprofit based in California that teaches people how to recycle water in their homes. She's also shown that the water left after cleaning with soap nuts can be reused to irrigate crops. 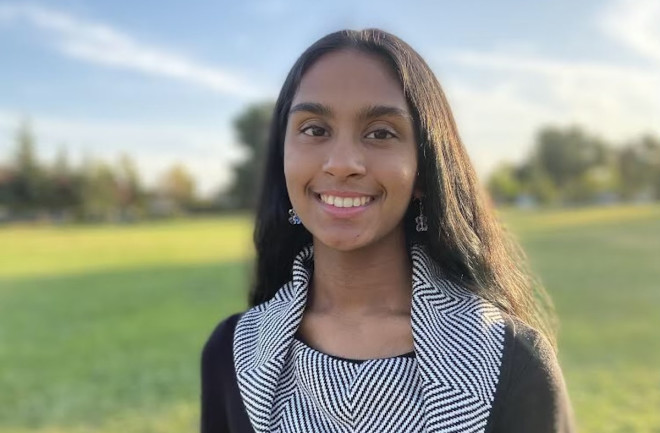 Shreya Ramachandran, 17, remembers witnessing California’s water crisis firsthand on a visit to Tulare County in 2014, when she was still a preteen. Tulare spans a large swath of farmland in California’s Central Valley, and at that time, locals were facing dire water shortages amid an ongoing drought made worse by climate change.

“I was talking to some of the people in the area whose wells completely ran dry, and they were left without water because they weren't connected to the central water grid. They were trucking water in for even basic needs,” she said. “I was really affected by their stories, and I wanted to do something to help.”

The experience spurred Ramachandran, who lives in Fremont, California, to find ways to reuse water from sinks, showers and laundry machines — what’s known as gray water — to help people better cope with intense drought. She has won numerous awards for her research, was named a global finalist in the 2019 Google Science Fair, and is featured in the forthcoming PBS Peril & Promise climate change documentary, The Power of Us.

Ramachandran said that after she returned home from Tulare, she made every effort to conserve water in her life. She took shorter showers and turned off the tap when brushing her teeth, but it had little effect on how much her house consumed.

Around that time, Ramachandran’s grandmother was visiting from India, and had brought with her a handful of soap nuts. A soap nut, also known as a soap berry, is a small yellow or brown fruit encased in a hard, brown shell. Soap nuts are native to India, where they are used for bathing. Massage one in a bowl of water, and it will begin to lather and smell of apples, Ramachandran said.

“I was using them as a shampoo, and I was thinking, ‘Okay, if they can be used for this purpose, maybe soap nuts can be used as an alternative laundry detergent as well. And then we can reuse the water because soap nuts are all natural,’” she said. “The best ideas come to you when you're in the shower.”

Ramachandran said that soap nuts, which are often sold as a detergent, make for an effective cleaning agent. One only needs to put four or five nuts in a cloth bag and toss it in with their laundry, and they can reuse that bag of nuts as many as 10 times, making soap nuts significantly cheaper than organic detergent. Ramachandran wanted to see if the leftover water could be used to nourish plants.

“I read a ton of papers. I developed a project plan. And I contacted universities up and down in California. I sent so many cold emails, did so many cold calls until, finally, a really wonderful professor at the University of California, Berkeley, agreed to look over my project plan and greenlight it,” she says.

That professor was environmental scientist Céline Pallud, who studies soil. She says that Ramachandran’s experiments were comparable to the work of a college student, which she said was “extremely impressive,” given that she was only 12 when she undertook the research.

Ramachandran tested the laundry water on tall fescue, a type of turfgrass, and an assortment of vegetables, comparing the effect of soap nuts with organic and conventional soaps and detergents. That meant setting up dozens of pots in a highly controlled space.

“I kicked my parents out of the master bedroom because I needed a space that was as close to a greenhouse as possible, and the master bedroom had ideal — and I mean, seriously, ideal — lighting and temperature conditions,” she says. Fortunately, her parents, both computer engineers, were willing to accommodate her.

“I didn’t take her seriously at first and tried to talk her into considering alternate places,” says her mother, Hiran Rajagopalan. “Ultimately, I didn’t want to disappoint her. After all, she was only trying to do science.”

Ramachandran tracked nutrients and bacteria in the soil and kept a close eye on the health of the grass. She looked for traces of E. coli, which can make people severely ill if consumed. She worked continuously, even on Christmas and New Year’s Day, and she took advanced classes in statistics to learn how to analyze all the data collected.

“I found that gray water from soap nuts, as well as several organic detergents, could be reused safely for non-potable uses,” she says. “But gray water that was generated from [conventional] soaps that had things like soluble salts and boron, that became very detrimental because those ingredients accumulated in the gray water and then made it unusable for crop irrigation.”

Ramachandran went on to found her own nonprofit, The Grey Water Project, which teaches people how to recycle gray water in their own homes. She does workshops at schools, libraries and corporate events, and she developed a gray water science curriculum that has been implemented in more than 90 schools so far.

“I tell people what the best practices are for gray water reuse. And I let them know, ‘These are the detergents you should be using,'” she says. “My ultimate goal is essentially for gray water reuse to be just as common as paper or plastic recycling.”

Ramachandran, now a senior in high school, is applying to colleges and has already been accepted to Stanford University. She wants to study biology and environmental science to continue the kind of work she is already doing. But she also wants to study public policy to help make use of good science.

“I've learned a lot about what it means to be a scientist,” she says. “You can use science to develop the solutions, but it's equally important to implement them.”