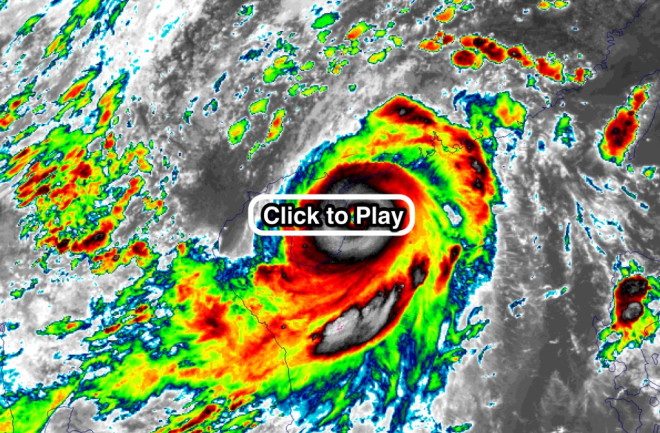 A screenshot from an animation of infrared images from the COMS-1 satellite shows Super Typhoon Rammasun slamming ashore in southern China today. Click the image to watch the animation. (Source: Cooperative Institute for Meteorological Satellite Studies) Super Typhoon began pummeling the mainland of southern China today, slamming ashore on the Luichow Peninsula with winds at landfall that may have been as high as 135 miles per hour. Click on the image above to watch an animation of infrared satellite images showing the storm barreling ashore. It was the strongest storm to hit southern China in 41 years. Here's a spectacular closer view:

A second animation of Super Typhoon Rammasun coming ashore in southern China, as seen by the COMS-1 satellite. Click to play. (Source: Cooperative Institute for Meteorological Satellite Studies) The eye of the storm is clear and well defined as it approaches and crosses the very northern tip of Hainan Island. From there the storm made landfall on the mainland just to the north. As I write this post on Friday evening (MDT in the U.S.), Rammasun is out over the Beibu Gulf and headed for another landfall, probably along China's border with Vietnam. (For a map of it's projected track, click here) Before hitting China, the storm swept across the Philippines, killing 12 people. Its center came within 40 miles of Manilla, the Philippine capitol. With winds of 105 miles per hour, it was one of the strongest ever to affect the city, according to Jeff Masters, chief meteorologist for the Weather Underground.