An animation of radar images shows Super Typhoon Nepartak barreling toward landfall on Taiwan on July 7, 2016. (Source: Taiwan Central Weather Bureau) As I'm writing this at 2:30 pm on Thursday in Colorado, Super Typhoon Nepartak is reported to be storming ashore on the southeastern coast of Taiwan with wind gusts up to about 180 miles per hour. I'm not sure of the storm's sustained wind speed at landfall; we'll have to wait for that. But as of earlier today, Nepartak had managed to hold on to Category 5 strength, which it has sustained for almost two days. On Wednesday, the storm attained a peak wind speed of 175 miles per hour. Video captured by James Reynolds of Earth Uncut TV shows violent rainfall tearing through Taitung city during the evening local time: https://twitter.com/EarthUncutTV/status/751133526582398976

The storm is forecast to bring as much as three feet of rain to the island of Taiwan, threatening devastating flooding and landslides. After crossing the island, Nepartak is expected to make a second landfall in China on Saturday as a tropical storm.

Vsible and infrared images of Super Typhoon Nepartak from the Suomi NPP satellite show the well-defined eye of this powerful cyclone on Thursday, July 7. (Source: NOAA) A week of heavy monsoon rains in eastern and central China have already caused massive flooding, resulting in the deaths of about 140 people. More than 26 million people in 11 provinces are reported to have been affected. 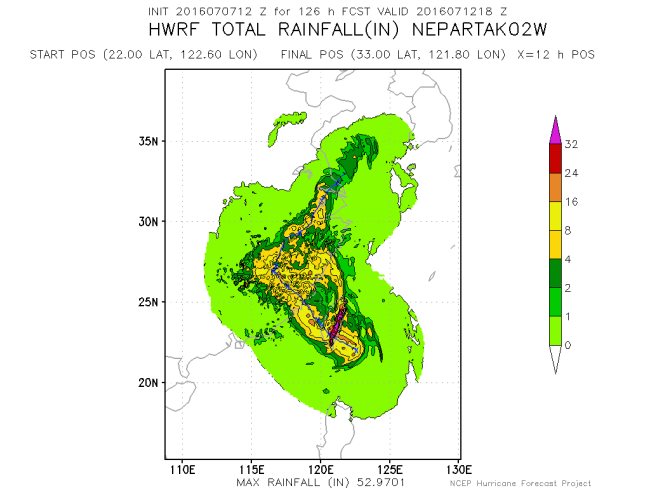 Total rainfall from Nepartak as predicted by the HWRF model. Light yellow colors indicate rainfall of 8 to 16 inches. (Source: NOAA/NCEP/EMC) And now, many of those same people will be facing renewed devastation from the remnants of Nepartak.