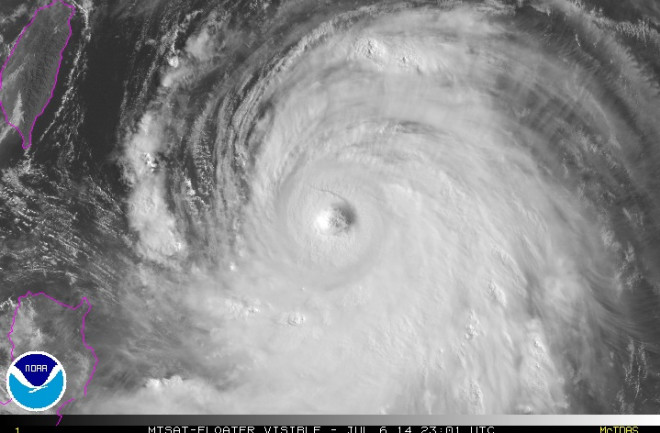 Super Typhoon Neoguri is seen churning in the western Pacific Ocean on Monday in this image from Japan's MTSAT weather satellite. (Source: Japan Meteorological Agency) Last Thursday, as Hurricane Arthur was bearing down on the North Carolina coast, I posted a short update about trouble just beginning to brew in the Pacific. Now, that trouble has arrived — big time.

Source: Joint Typhoon Warning Center What was then a tropical storm has now blossomed into Super Typhoon Neoguri. As I'm writing this shortly after midnight on Monday (in California), the storm has sustained winds of 155 miles per hour, with gusts to 190 mph, according to the Joint Typhoon Warning Center. Right now it's forecast track points toward a brush with Okinawa on Tuesday and then landfall on Japan's southern island of Kyushu on Wednesday. (Click on the thumbnail image above for a map showing the storms's expected track and wind speeds.)

This broad view of the Pacific Ocean acquired by Japan's MTSAT weather satellite shows Super Typhoon Neoguri with a well-developed eye in the western Pacific Ocean south of Japan on Monday, July 7, 2014. (Source: Japan Meteorological Agency) Although Neoguri should weaken a bit by the time it hits Japan, it still has the potential to cause a huge amount of damage, especially from rain and landslides. Torrential rainfall not connected with the typhoon has been drenching Kyushu -- 10 inches in 24 hours in at least one part of the island.