One remarkable forest is busy purifying the planet. 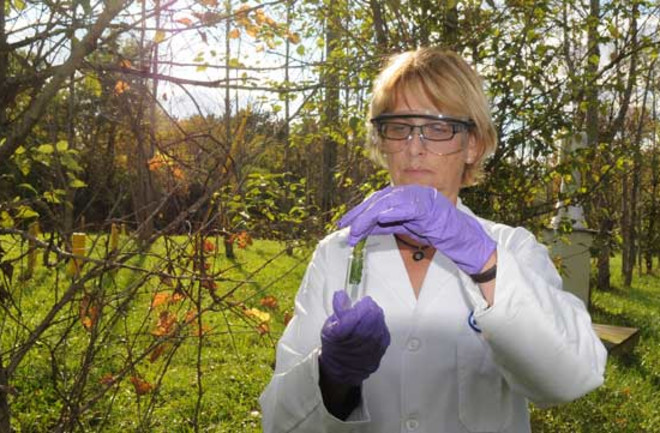 Argonne, Illinois—A legacy of the Argonne National Laboratory’s early foray into atomic energy lies buried here on its campus, about 25 miles southwest of Chicago. Although solid wastes from all sorts of experiments have been sealed in a landfill, certain liquids, mostly chlorinated solvents, still taint the water that runs under the site. The ongoing attempt to remove these contaminants occupies an enormous experimental facility that covers four acres and looks like a forest.

“I like to brag that I have the biggest lab at Argonne,” says agronomist Cristina Negri, indicating an expanse of 900 poplars and willows growing in rows. The trees stand about 30 feet high. More important, their roots extend 30 feet down, where they tap the contaminated aquifer and literally pull pollutants out of the ground.

“The purpose here is not to grow the most beautiful trees,” Negri says as she walks among them. “It’s to make them work.”

Under normal circumstances, tree roots prefer to sip water from sources as close as possible to the surface. But these trees, planted in 1999, don’t have that option. They are impressed laborers, set into plastic-lined pits that force their roots to tunnel deep for drink. The roots lift the contaminated water into the tree trunks, where transport tissues conduct it on up to the branches and leaves. From there, as droplets transpire through leaf pores, the water evaporates and sunlight breaks down the dissolved solvent molecules, rendering them harmless. As Negri explains the process, the smell of poplar seems to excite her like catnip.

Before the willows and poplars took over the job of wastewater management, Argonne was using extraction wells to pump contaminated water to a treatment plant. But the static mechanical pumps could not chase after groundwater that continually changed course through the complex terrain. The natural pump of a willow or poplar, on the other hand, is not only self-sustaining but so water-loving that it will snake down or fan out as far as need be to reach moisture.

Negri’s trees each pump as much as 26 gallons of water per day at their summer peak. She measures the daily flow through the trunks by inserting probes that transmit data to solar-powered recorders mounted on tripods nearby. Periodically, laboratory workers roam the forest to sample bark, small branches, and leaves to assess the trees’ success in pollution extraction.

“That’s the beauty of this site. On a nice day, we just say, ‘OK, let’s go sampling!’ We don’t have to plan for trips or pack dry ice. We just take our collection bottles into the field, and when we’re done we carry them back inside to our other lab.” The glass collecting vials are sealed and either frozen for future study or oven-heated to 90 degrees Centigrade (194° Fahrenheit), hot enough to volatilize the pollutants from the tree tissues. An automated gas chromatography apparatus then extracts a puff of air from each bottle and quantifies the type and concentration of pollutants released.

In summer, trichloroethane levels generally run high (several thousand parts per billion), but in winter, after the leaves fall, the roots stop pumping and the bare branches bear no sign of contamination. Since the trees don’t accumulate any permanent residue of pollution, they can eventually be chopped down and chipped, their remains distributed around other plantings for soil enrichment.

The technical term for this green, and increasingly prevalent, form of environmental cleanup is phytoremediation. At Argonne it will give way, over the next 20 to 30 years, to ecological restoration, as the pollutants are removed and the worker trees replaced by bur oaks and other hardwoods native to the Great Lakes region—trees that grow slowly and draw only a fraction of the water taken up by the hasty, thirsty poplars and willows.

“I’ve turned everybody I know into a willow watcher,” Negri says. “In the spring, willows are the first trees to turn yellow and green and start putting leaves out.”

Worker trees like poplars and willows will one day give way to expanses of native oaks.

A second Argonne experimental forest, in Murdock, Nebraska, is helping the U.S. Department of Agriculture address the mess that it made in corn-belt communities during the 1960s, when storage drums full of grain were routinely fumigated with carbon tetrachloride to control pests. The colorless liquid seeped into the ground and continues even now to foul the local water supply.

When members of the Argonne team arrived at Murdock in 2004 for an initial assessment, they found trace levels of “carbon tet” in the resident vegetation. Their solution, implemented the next year, was to create an instant forest. Most of the 2,000 planted saplings were poplars and willows, the same types that had demonstrated their effectiveness in Illinois. Local varieties, such as green ash and catalpa, were added to the mix to test their cleanup capabilities, along with Nebraska wildflowers for diversity and a wetland to buffer and further beautify the woods. “People would much rather see a forest than a pump.”

By 2007, two years after planting, the exact location of the underground plume of contamination could be mapped from the surface by examining the trees. Even in summer, trees in some areas tested clean while those in others were steadily bringing up carbon tetrachloride. Meanwhile, all the trees seemed to have enjoyed unusually rapid growth thanks to another pollutant in the Murdock soil: nitrate, possibly from fertilizers applied in the surrounding cornfields.

“I chose agriculture when I first went into science because I wanted to be a nature doctor,” Negri says. “I loved the order and neatness of plowed fields. I never realized then how polluting agriculture could be.”

The compatibility of the forest and the fields conjures another poplar dream of combining remediation with energy production. Negri’s colleagues have looked to the poplars as a possible source of ethanol for biofuel. The trees’ need for plentiful water seemed at first to make them a poor choice, since water itself is likely to become scarce. But if the trees can slake their thirst with polluted water, and if they can grow on marginal land ill-suited for crops, then their promise as an alternate energy source grows doubly green.