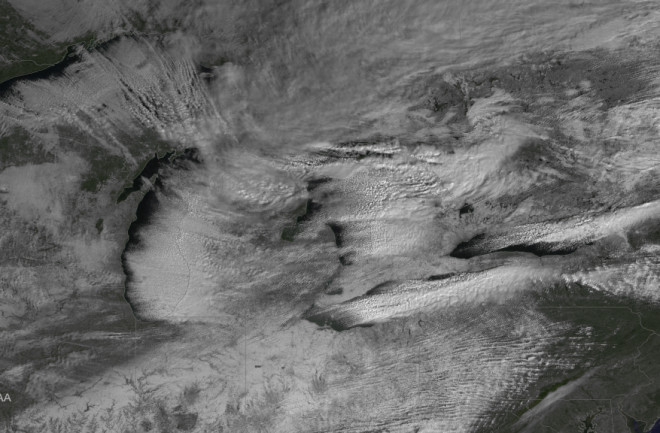 A GOES weather satellite captured this image of Lake effect snow streaming across and downwind of the Great Lakes on Nov. 18, 2014. In the upper left corner is Lake Superior. Below it is Lake Michigan. To the east is Lake Huron and below it Lake Erie — source of the snow pummeling the Buffalo area. And then north and east of Lake Erie is Lake Ontario. (Source: NOAA Environmental Visualization Laboratory) For Buffalonians and others in the Great Lakes region, the snow just keeps on coming. And coming, and coming, and... Yesterday, some suburban areas of Buffalo got 60 inches or more, prompting the National Weather Service to Tweet that the area may have set a record for "highest 24hr snow in a populated area." Time will tell whether that's ultimately confirmed. Regardless, another round is on the way, with an additional two to three feet forecast for Wednesday through Friday morning. And that's just in the Buffalo area. The National Weather Service has also issued a lake effect snow warning for counties east of Lake Ontario, with two feet forecast there. Yesterday, I posted a satellite image of a lake effect snow band over Lake Erie. Today, NOAA's Environmental Visualization Laboratory published the stunning image above of a broader region of the Great Lakes. It was captured by a GOES weather satellite. Note the long cloud streamers moving across and downwind of all of the lakes.

A screenshot of a video captured Wednesday by a drone in West Seneca, N.Y., near Buffalo. Click on the image to watch the video on Youtube. (Source: James Grimaldi Youtube channel.) I also spotted a spectacular video on the Washington Post's Capitol Weather Gang blog and thought I'd share it with you. Above is a screenshot from the video, which was captured by James Grimaldi using a drone flying over his neighborhood in West Seneca, N.Y. near Buffalo — which has been particularly hard hit. I wasn't able to contact Grimaldi to ask permission to run the video in time for this post, so I've included a screenshot. Head over to his channel to watch the video by clicking on the screenshot, and then please come back here for more!... It's important to point out that lake effect snows are not terribly unusual downwind of the Great Lakes. Even so, this episode has been particularly fierce. Which raises the question: What's causing the mayhem? Two things: the still-warm waters of the Great Lakes, and an outbreak of frigid arctic air flowing across the waters. Cold air cannot hold much of the water vapor it picks up from warm waters, so it condenses, forming clouds that stream toward the east on prevailing winds. Moreover, the stark difference between the frigid air and warm water triggers instability in the atmosphere. The result has been extreme snowfall downwind of the lakes, particularly Lake Erie.

The forecast position of the jet stream on Wednesday evening is seen in this visualization generated by supercomputers. The Great Lakes region is circled. (Source: http://earth.nullschool.net/) What's causing those frigid temperatures? The image above tells the tale... Note the pink, orange and red bands plunging southward across the midsection of the United States. You're looking at a visualization of the position of the jet stream as I'm writing this on Wednesday evening. This jet stream pattern is as extreme as the snowfall. Along the U.S. West Coast, the jet stream winds arch far northward, creating a ridge of high pressure that has brought unusual warmth. A little farther east, the jet stream plunges south, creating a trough of low pressure over the U.S. midsection. This has allowed Arctic air to pour south — and to envelope the Great Lakes region, which I've circled in the image. As Jeff Masters, chief meteorologist at the Weather Underground, puts it:

. . . we've seen an unusual number of extreme jet stream patterns like this in the past fifteen years, which happens to coincide with the period of time we've been observing record loss of summertime Arctic sea ice and record retreat of springtime snow cover in the Arctic. Could it be that these changes in the Arctic are causing the wacky jet stream behavior of recent years?

This is the subject of intense scientific investigation and debate. So we don't have an answer yet. If you're interested to read more, check out Masters' post.