Study: We Still Have a Chance to Save the Polar Bears 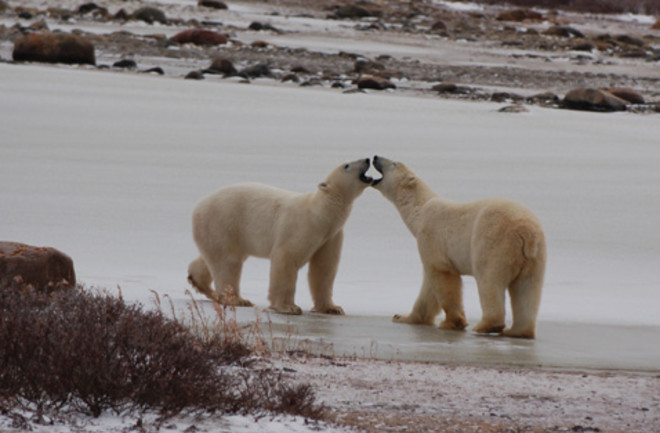 Polar bears, the poster-species for climate change, have been the subject of reports about new or growing threats in 2010: One story noted that the warming Arctic is pushing grizzlies north into polar bear territory, while another questioned whether polar bears can change their diet as their icy habitat melts. But the journal Nature this week brought an antidote to all that doom and gloom. A study modeling the Arctic climate suggests that it's still not too late to protect the polar bear habitat, and therefore save the polar bear. The world just needs to reduce its greenhouse gas emissions. The question is one of tipping points: Is the total demise of the Arctic summer sea ice already inevitable, or could a slowing of emissions also slow down the ice loss?

The dramatic retreat of Arctic sea ice in the summer of2007 prompted some researchers to warn that the system may have reached a tipping point that would lead to the disappearance of summer sea ice within the next several decades, regardless of actions humans took to reduce greenhouse-gas emissions. That concern, in turn, helped elevate the polar bear to climate-icon status and reportedly fed into then-President George W. Bush's decision in 2008 to list the bear as "threatened" under the Endangered Species Act. The new study, however, finds no "tipping point" now or in this century in Arctic sea-ice decline, but rather a relatively steady fall-off in ice extent as average temperatures increase. [Christian Science Monitor]

, modeled five different scenarios for greenhouse emissions in the future. He saw a linear relationship between rising temperatures brought on by those emissions and the retreat of Arctic

ice. What he didn't see was a sharp sudden drop, a point at which crossing some temperature boundary led to an irrevocable disappearance of the ice that would doom the bears.

The notion that no "tipping point" exists for Arctic ice decline has spread in climate science for several years, supported by deeper examination of the North's physics. Initially, the media exaggerated fears that the loss of ice, which naturally reflects light, would expose more heat-absorbing water to the sun, causing runaway decline. However, scientists now widely believe this feedback is balanced by a host of other phenomena, like increased flows of hot air from the tropics, improved ice formation efficiency under thinning conditions and the region's general cloudiness. [The New York Times]

It's a tricky question: The idea that more emissions equals higher temperatures equals less ice is nice, clean, simple physics. But the physics at work in Arctic ice and climate are not so simple, and include the interplay of that "host of other phenomena."

Even if Amstrup is correct—that there is no tipping and therefore there is still time to act—polar bear experts like Andrew Derocher aren't holding their breath.

"Reduced emissions would yield greater abundance and wider distribution of polar bears than the 'business as usual' emission scenario," said Derocher of the paper. Derocher is sceptical that policymakers will act to curb emissions in time. "There are few indications that such policies will be implemented in a timely manner. Globally, 25% of mammalian species are threatened with extinction and, in this context, the plight of polar bears is sadly typical," he said. [The Guardian]

It will be interesting to see how findings like these effect the conversation about just how to protect the bears. We reported last month

that a U.S. District Court judge had asked the Interior Department to review its decision to list polar bears as "threatened" rather than the more severe "endangered

." The government has been loath to list the bears as endangered because it could open a legal can of worms, particularly over whether the Endangered Species Act could be used as a legal basis for pressing for emissions reductions. Related Content: 80beats: Bear Fight! Grizzlies Are Creeping Into Polar Bears’ Canadian Turf

Not Exactly Rocket Science: For Polar Bears, the Price of Rapid Evolution Is a Weaker Skull

DISCOVER: Will the Walrus Withstand a Warmer World?