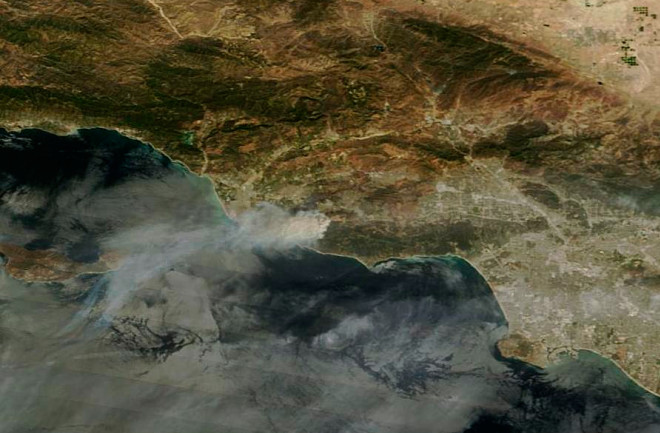 The Springs Fire near Los Angeles sent a plume of smoke out over the ocean on Friday, May 3, as captured here by NASA's Terra satellite. (Image: NASA) The Springs Fire in Southern California expanded to more than 10,000 acres today, threatening more than 4,000 homes. Driven by intense Santa Ana winds, the fire has produced a smoke plume that's visible from space, as seen in the image above from NASA's Terra satellite. A dense grid of streets and highways can be seen in Los Angeles to the right of the image. The fire began at about 7 a.m. on Thursday morning. Today it raged through the Santa Monica Mountains and jumped the Pacific Coast Highway, threatening a Naval installation at Point Mugu, according to the Los Angeles Times. Here's a false-color view of the same scene:

The same scene but in false color to emphasize burned areas. (Image: NASA) In this view, vegetation appears green, desert and naturally bare soil is depicted in a sandy color, and burn scars show up in red to reddish-brown tones. Areas previously burned by the Springs Fire are clearly visible as rusty-colored patches in the image. The ares of active burning are a hot pink. (For more details on this false color view, see the explanation of the 7,2,1 Band Combination of Terra's MODIS instrument here.) Two GOES weather satellites also imaged the Springs Fire. The folks at the Cooperative Institute for Meteorological Satellite Studies put together a little animation, showing the evolution of the blaze yesterday:

The smoke plume spewing from the Springs Fire can be seen in two animations side by side. (Image: CIMSS Satellite Blog) According to the CIMSS blog, the GOES-15 satellite was positioned to provide a better view of the smoke plume. That animation is to the left. Meanwhile, GOES-13 provided images more frequently. (The panel to the right.) As of the end of April, all of California was either abnormally dry or experiencing actual drought conditions:

Image: U.S. Drought Monitor As the map indicates, the area of coastal California where the Springs Fire erupted is currently experiencing moderate drought. And those conditions are expected to continue or even worsen through the end of July. So I may well be posting additional satellite images of California wildfires in the coming months.