South Pacific Tsunami Caused by Two Earthquakes in One

Originally scientists believed that one earthquake had set off the deadly tsunami that struck Samoa, American Samoa, and Tonga in September of 2009. But twostudies to appear tomorrow in Nature argue that instead of one there were really two earthquakes that took place in rapid succession. 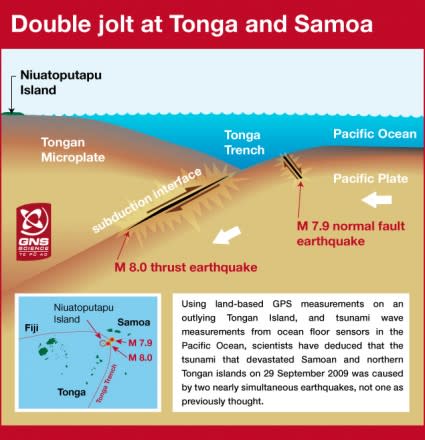 For some scientists, the studies clear up odd behavior that didn't fit with the originally blamed "normal-fault" earthquake in the Pacific Northwest.

“We knew right off the bat that something was weird about this earthquake,” says geophysicist Eric Geist of the U.S. Geological Survey in Menlo Park, Calif. Geist wasn’t involved in the current studies but has puzzled over the anomalous signs produced by the quake. “This is a very complicated event, and these studies, for me, really helped explain a lot.” [Science News]

John Beaven, lead author of one of the studies, toldNature News the researchers expected the Tongan island to move about three inches to the west as a result of the quake, but GPS showed it had moved nearly a foot east. They also expected the sea bed to drop but instead it rose, a sign of a different kind of "megathrust" quake. A separate study led by Thorne Lay confirmed signs of this alternate type of earthquake from seismic readings. Though both studies point to two different types of earthquakes, they disagree on which earthquake came first and caused the other. Ronald Burgmann, a geophysicist at the University of California, Berkeley, who was not involved in either study says, overall, they both make a good case:

"As in all good chicken-and-egg mysteries," he says, "there is merit to both views." [Nature News]