There is more mercury in the environment than scientists once thought, and birds provide surprising clues about its impact. 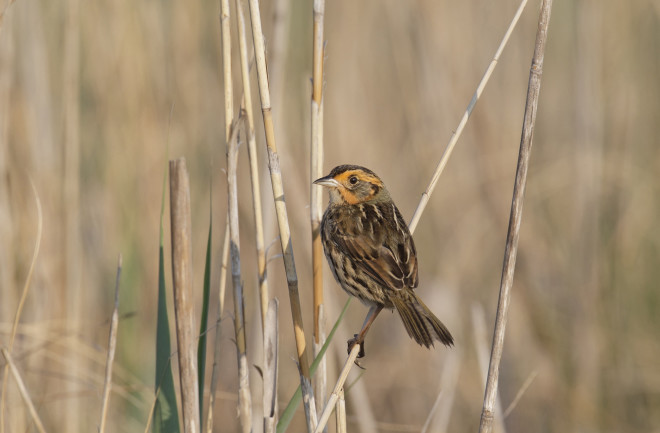 The loon has long been a sentinel creature for detecting mercury in our waters. “Loons, because they are exclusively fish eaters, are a great indicator of how bad mercury can get in the wild,” says ecologist David Evers, chief scientist at the Biodiversity Research Institute, a nonprofit organization in Gorham, Maine. But now ordinary sparrows and backyard birds may join the club, providing researchers with a broader picture of mercury’s effects on the environment.

In a new study [pdf], Evers’s colleagues found high levels of mercury in the feathers of saltmarsh sparrows living in the wetlands of North Cinder in New York’s Long Island. Whereas loons accumulate mercury by eating large fish, songbirds are poisoned by eating spiders and other bugs.

“You might ask what difference it makes if a little bird is suffering from mercury poisoning,” conservationist Timothy Tear of the Nature Conservancy in New York says. But matter it does, since the effect of mercury on birds provides information about how the heavy metal affects the brain. Researchers from the College of William and Mary studied song performance in four species of birds along the South River in Virginia, an area that was contaminated by industrial mercury from 1929 until 1950. They found that wrens affected by mercury sang shorter songs with fewer notes. Affected sparrows produced mating calls that had a lower tonal frequency and were less complex.

“Mercury is far more prevalent in our environment than anybody thought. All these decades, people were out looking for mercury and missing this key group, the little songbirds out in the yard,” Evers says. “These birds have a message for us: Mercury is everywhere on Earth now, at levels that Mother Nature never intended.”