Snowpack in the West "isn't just low — it's gone"

An animation of images acquired by NASA's Terra satellite, one on April 27, 2013, and the other from April 29 of this year, when snowpack was less extensive. (Source: NASA Worldview) The quotation in the headline for this post is the assessment of David Garen, a hydrologist with the Natural Resources Conservation Service. It's a slight exaggeration, as the animation above shows. But not by much. As Garen puts it in a press release issued yesterday by his agency:

Across most of the West, snowpack isn’t just low – it’s gone. With some exceptions, this year’s snowmelt streamflow has already occurred . . . We still have some snowpack in northern Colorado, western Montana and southern Wyoming. In addition, snowmelt from Canada will flow into the Columbia River 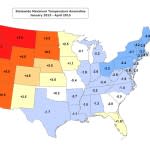 Source: NCDC Snowpack at many monitoring stations is at or near the lowest on record, according to Garen. The culprit: strikingly warm temperatures in the West that hindered accumulation in the mountains and then led to premature and rapid melting. Click on the thumbnail at right to see a map showing how statewide maximum temperatures varied from the long term average between January 1 of this year and the end of April. And please make sure to keep reading for a discussion of the broader context of what's happening to snowpack in the West. That includes megadroughts of the past — and how they may serve as an analogue for what we might expect in the future, particularly as the climate continues to warm under our influence.

But before I get to that, here are some additional details about this year's thin western snowpack — and the impacts we should expect. One exception to what has been happening in most of the West is the South Platte River Basin, which flows east out of the Front Range of Colorado. The basin includes Denver and Boulder (and the little town of Niwot near Boulder where I live). The snowpack in the mountains above us has gotten a big boost from recent storms, and it peaked very close to normal. That will help keep reservoirs in my part of the world topped off. Elsewhere in the West, the forecast for the flow of water in streams and rivers is pretty bleak, as the map below shows.

Streamflow Forecast Those green circles in Colorado show the relatively good prospects on the east side of the Front Range. Everywhere else, it's a sea of red, orange and yellow, indicating low flows in the forecast. Of particular concern is the flow of water through the Colorado River Basin and into Lake Powell, one of two giant hydrologic savings banks that help insure water supplies for more than 30 million people living in seven western states. Downstream of Powell, Lake Mead reached its lowest level on record at the end of April, with an elevation above sea level of just 1079.03 feet. Since 1998, it has come down more than 132 feet. If it keeps coming down and sinks below 1,075 feet by Jan. 1 (and there is a 1 in 3 chance of that happening), the Bureau of Reclamation will have to issue a first ever official shortage declaration. That would mean mandatory cuts in water deliveries, mostly to Arizona. What the Southwest in particular has experienced so far may be pretty bad. But it does not yet approach the severity and longevity of megadroughts that are known to have occurred in this part of the world centuries ago. As a team of researchers led by Connie Woodhouse of the University of Arizona put it in a paper published by in the Proceedings of the National Academy of Sciences back in 2010:

The warmest such episode, in the mid-12th century, was more extensive and much more persistent than any modern drought experienced to date, with cumulative streamflow deficits on the Colorado and Sacramento [in California] that would severely tax the ability of water providers to meet demands throughout the Southwest.

Skeptics of human-caused climate change argue that the climate system is capable of producing intense, long-lasting megadroughts all by its lonesome, without any help from us. The megdrought of the mid-12th century shows that this is undeniably true. But it is only part of the picture. Woodhouse and her colleagues point out that the mid-12th century drought was notable not just for dry conditions but also for unusual warmth. That makes it an analogue for the ongoing drought, since unusual warmth has been significant factor now too. In fact, temperatures today are even warmer than they were back in the 12th century. Moving forward, the authors say the 12th century megadrought gives us some clues as to what to expect with continued human-caused climate change. But the comparison goes only so far. Here's why, according to Woodhouse and her colleagues:

Although these “warm” medieval droughts may be considered conservative analogues for future droughts, it is important to recognize that there are many reasons that the mid-12th century drought cannot be considered an exact analogue for future worst-case droughts. Besides anthropogenic warming, there have been a multitude of changes in land cover throughout the Southwest due to human activities since the late 19th century. Conversion of desert and grassland to cropland, grazing, fire suppression, introduction of invasive species, disturbances leading to soil erosion and blowing dust, and the development of urban areas have all likely had impacts on regional climate. No systematic studies on these land cover changes and their impacts on climate or drought have been undertaken, but these changes are another important reason that droughts of the past are unlikely to be an exact analogue for current and future droughts. In addition, from an impacts standpoint, droughts have a much broader range of impacts on human activities today than in the past because of today’s greater demands on limited water resources.

In other words, the past has something to teach us. But we should also keep in mind that the past lacked one very significant factor that's present today: Humankind's ability to remake entire natural systems.