Snow in Greenland is melting — in winter 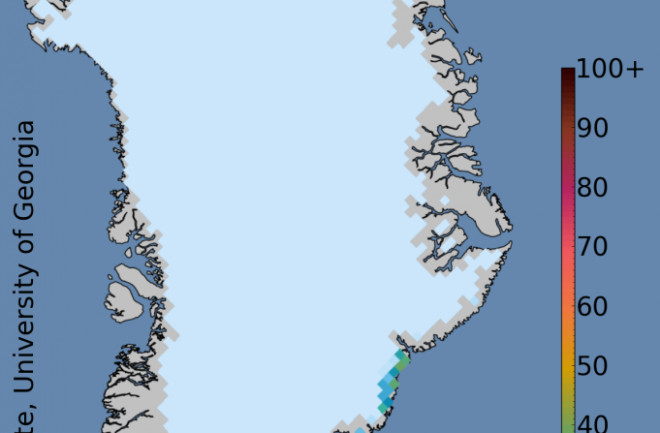 This Greenland cumulative melt days map shows the total number of days that surface melting has occurred for the year to date. (Image: National Snow and Ice Data Center Greenland Ice Sheet Today) Update: I've been in touch with Ted Scambos of NSIDC. He corrected me on one fact that I misunderstood, and he added some new information about the significance of this event. See below. (I've also changed the headline.) As the map above shows, some portions of Greenland's ice sheet have experienced melting at the surface for more than 30 days since the first of the year. And at least through the end of last week, the melting, as revealed by satellite data from the Defense Meteorological Satellite Program, had been continuing. It's not just wet snow. What's being observed is wet snow. Even so, it is "real melting," Ted Scambos, Senior Research Scientist with the National Snow and Ice Data, told me in an email message on Sunday afternoon. "Air temperatures along the southeastern coast for the period Feb 10 - 15 are running 2 to 6 C above normal. Nuuk, the capital, on the very southern west coast, is currently just a couple of degrees below freezing." Here is additional clarification I received from Scambos this morning:

The main message is that a short period of melting during the day will trip our melt detection algorithm and count as a day. Overall, this is a bit unusual -- a warm spell -- but I would downplay its exceptional nature at this point.

That said, it may herald more melting to come. In his email this morning, Scambos told me that "it may be the early start to another very high melt year, but we would have a better insight on that by May or so." For an NSIDC graph showing how the extent of melting so far this year compares to the long-term average, click here.

Update: Since Scambos wrote to me this morning, he emailed me back in the afternoon with some additional information. He noted that all of Greenland, not just the southeast coast, has been 2 to 6 degrees C warmer than the 30-year mean. And he also said this:

Is it a warm winter in Greenland? Yes, very warm. Incredibly warm? Worth writing home about? Not sure, but it is not the biggest anomaly in the Northern Hemisphere. That title goes to Svalbard: 10 to 12 C above normal since December.

In January, scientists published research showing that over the past 20 years, areas on the west side of Greenland have warmed in winter by more than 10 degrees C. In summer, warming has amounted to 2 to 4 degrees C. The researchers found that the east side of Greenland had not warmed up as much during those two decades. Do the overall warm conditions in Greenland so far this year, and the melting seen on the southeast coast, suggest that something new is happening? Based on what Ted Scambos has told me today, I think the fair answer is that it is just too soon to tell. This year's winter thaw follows a record-setting summer melt season in 2012. From the NSIDC's recently launched Greenland Ice Sheet Today web site:

Greenland’s surface melting in 2012 was intense, far in excess of any earlier year in the satellite record since 1979. In July 2012, a very unusual weather event occurred. For a few days, 97% of the entire ice sheet indicated surface melting.

For several decades now, the Arctic has been warming twice as fast as any other region on Earth — one of the clearest symptoms of human-caused global warming. And it has been contributing more to sea level rise than Antarctica has. In research published last November, scientists reached something of a consensus on what the warming has been doing to the polar ice sheets. Here's Richard Kerr's summary (subscription required) in the journal Science:

By the new reckoning, the Greenland ice sheet lost 263±30 billion tons of ice per year from 2005 to 2010. Overall, Antarctica lost about 81 billion tons per year in the same period; the huge East Antarctic portion of the ice sheet registered a small gain, more than offset by losses in West Antarctica and the adjacent Antarctic Peninsula. Since 1992, the two ice sheets lost enough ice to raise sea level by about 0.6 millimeters per year on average, out of the observed 3 millimeters per year. (Most of the rest of the sea level rise came from melting mountain glaciers and from the expansion of seawater due to warming.)

A glacier flowing off the Greenland ice sheet, as seen on a flight from Oslo to New York in late January. (Photo: copyright Tom Yulsman) I'll be keeping an eye on what's happening in Greenland, so check back for updates. The Arctic Oscillation is currently in a negative phase, and this typically brings warmer than usual weather to at least parts of Greenland. So we may see even more melting. We'll see.