The White House got caught scheming to dilute the endangered species act today, and the first volleys in a potentially fun Washington rhetoric battle have been fired. 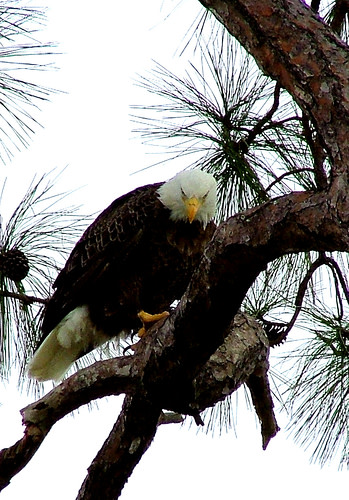 To summarize: REPORTERS: Somebody leaked an early draft of this administration proposal to us and it says it will let the various federal agencies decide for themselves whether a road or tunnel, or whatever thing they want to build, will put rare wildlife at risk. They won't have to consult with Fish and Wildlife anymore. SEN. BARBARA BOXER (D-CALIF): That's illegal. If you want to do that, you're going to have to try to hammer legislation through congress. LOBBYIST FOR DEVELOPERS: We just want to be able to build things faster, and right now it really sucks for us how long we have to wait before we build things. WILDLIFE CONSERVATION GROUP: If the government lets you do that, bald eagles may die. DEPT. OF INTERIOR BUSH UNDERLING: We know that secretly this whole wildlife thing you guys are always talking about is actually about curbing carbon emissions. You just want to find a way to help halt global warming by stopping some developments that create emissions. You are obsessed with that or something. One potential way for greens to stop this proposal would be to try to find a legal basis on which to stall it until later in the year. If we then got Obama, he'd be able to erase the proposed Bush changes no problem because such edicts take a little while to go into effect. But if we got McCain, we'd probably be screwed on this.