NASA's EPIC camera on the Deep Space Climate Observatory spacecraft, known as DSCOVR, captured this image of Earth on June 9, 2018, when it was 993,764 miles from Earth. Bluish-gray wildfire smoke is visible. (Image: NASA GFSC. Animation: Tom Yulsman) We've become accustomed to striking imagery of wildfires captured by earth-monitoring satellites, including weather satellites stationed about 26,000 miles from the surface. That may seem amazing enough (it always does to me). But check out the image above of a plume of wildfire smoke so big and thick that it was visible to a satellite nearly a million miles away. Make sure to click on the image so see a larger version, and then click again to enlarge it. You'll see a faint yet visible pall of smoke mainly over Canada. It's bluish in contrast to clouds, which are much whiter.

SEE ALSO: A blanket of smoke from fires in Siberia is so huge it can be seen from nearly 1 million miles away in space

The image was acquired by the EPIC camera aboard the Deep Space Climate Observatory. DSCOVR's main role is to monitor the Sun for massive eruptions of material toward us that could disrupt communications networks, electrical grids and other systems. But the EPIC camera watches Earth, and on June 9th, it spotted that massive smoke plume. In case you doubt that it's smoke, check out this much closer view from a weather satellite: 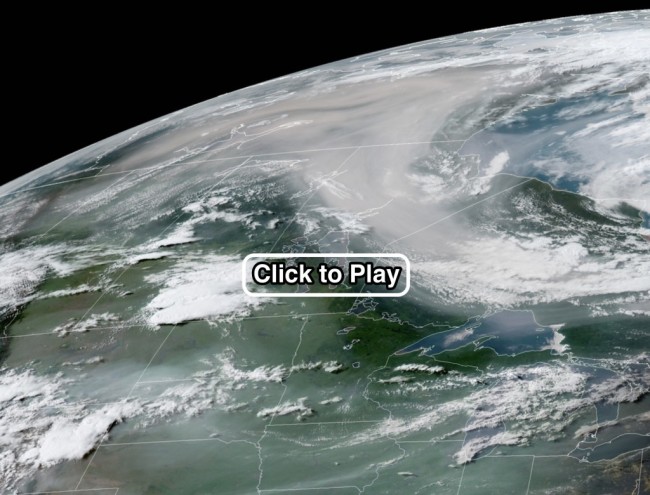 An animation of images from a weather satellite shows wildfire smoke blowing over Canada on June 9, 2018. (Note: When you click on the screenshot, the animation could be a little slow to fully load. Source: RAMMB/CIRA/) The images in the animation above were acquired by the GOES-16 weather satellite on June 9. It orbits much closer than DSCOVR — in geostationary orbit, with an altitude of 22,236 miles above mean sea level. By that date, the smoke had already spent days traveling thousands of miles — all the way from Siberia, where large swaths of the taiga were ablaze. At the beginning of the month, 190 Siberian fires were burning across some 1,275 square miles — an area twice the size of the city of Houston. Some of the most ferocious ones were burning north of the town of Nyurba in the Sakha Republic of Russia. How do we know the smoke blew all the way in from there? 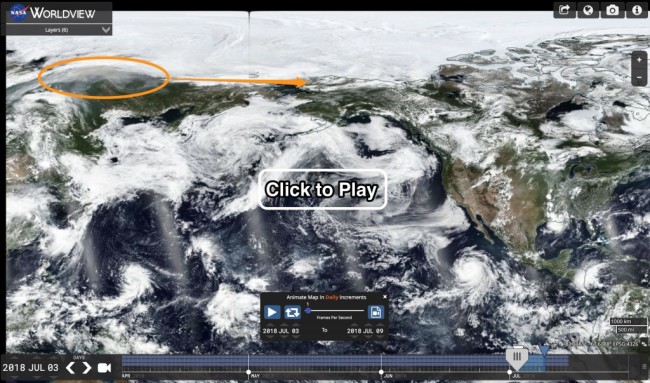 Animation of images from the Suomi NPP satellite between July 3 and 9, 2018. (Source: NASA Worldview) This is a screenshot from an animation, created using NASA Worldview (an awesome tool for exploring remote sensing imagery). I think the animation nails the case. Before clicking on it, look in the upper left corner for the smudgy pall of smoke centered on the Sakha Republic. I've marked how it will move as the animation progresses. After you click on the screenshot, make sure to hit the play button on the website that comes up. Now, let's zoom in progressively closer. First, a pair of images from Suomi NPP, which orbits at the relatively close altitude of 517 miles above Earth:

Two views of the fires burning in Russia's Sakha Republic on July 3, 2018. (Images: NASA Worldview. Animation: Tom Yulsman) These were acquired in different wavelengths by Suomi NPP's VIIRS instrument. One of the images shows the wildfires in natural color. The other views the scene in infrared, revealing the telltale orange signature of the flames, and recently burned areas in red. Lastly, even closer: 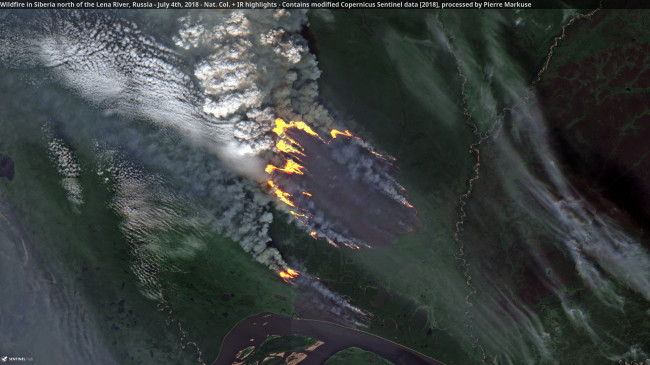 Satellite image acquired over Siberia on July 4, 2018. (European Space Agency via Pierre Markuse) The European Space Agency's Sentinel 2 spacecraft acquired this image of fires burning near the Lena River in Siberia on July 4. The spacecraft is in a sun-synchronous orbit at a mean altitude above Earth's surface of 488 miles. The landscape is seen in natural color with infrared added to reveal the actively burning areas. (Props to Pierre Markuse for processing the data to create this and the following image. Please see his Flickr page for more spectacular remote sensing imagery.) The fire seen in different wavelengths. (Source: ESA via Pierre Markuse) This is the same scene but now in an image combining near infrared and shortwave infrared portions of the spectrum. This version emphasizes the signature of the flames. It also better emphasizes a large area of land to the right that had burned previously, seen in reddish tones (whereas healthy vegetation is in bright green). It's amazing to consider that smoke from these and other fires traveled something like 5,000 miles, possibly reaching New England and beyond. And that it was actually visible from a million miles away.