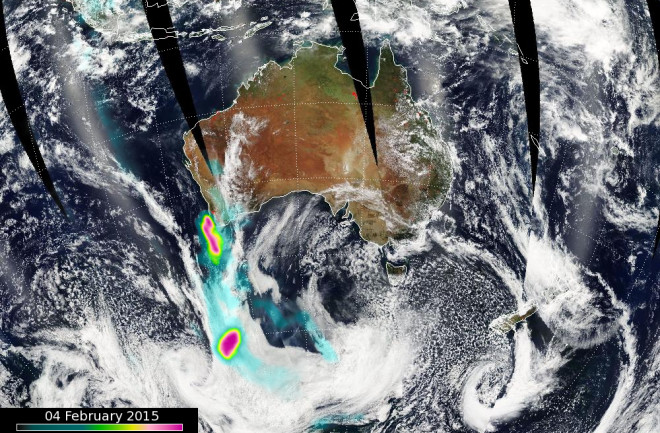 Smoke from large bushfires in Western Australia streamed south almost to Antarctica, as detected by a sensor on the Suomi NPP satellite. (Source: NASA Goddard Space Flight Center) Two big bushfires — one described as the largest in Western Australia's recent history — have lofted large amounts of smoke high into the atmosphere, where it has been picked up by winds and blown 2,000 miles to the south. Have a look at the image above, which was created using data from the Ozone Mapping and Profiler Suite instrument, or OMPS, on the Suomi NPP satellite. The big magenta-colored spot to the south of Western Australia shows the highest concentration of aerosols from the smoke. When I follow the lighter blue plume from there to the south and east, I think I see some aerosols just off the coast of Antarctica.

Thick smoke streams from two bushfires in Western Australia, as seen by NASA's Terra satellite on Feb. 4, 2015. (Source: NASA Earth Observatory) The image to the right, acquired by NASA's Terra satellite on February 4th, shows smoke plumes from the fires streaming south. The southern blaze, named the Northcliffe fire after the town it has menaced, is the bigger of the two, totaling 80,000 hectares, or 300 square miles, as of this morning. The top of the smoke plume from that fire has taken on the appearance of a head of cauliflower. These are pyrocumulus clouds, which are sometimes called "fire clouds." Pyrocumulus clouds form when heat from a fire forces the air to rise high into the atmosphere. This leads to cooling and condensation of water vapor, forming billowing clouds. (For more on this, see this post at NASA's Earth Observatory.) The pyrocumulus clouds from the Northcliffe bushfire have injected smoke high into the atmosphere, and from there winds have pushed it far to the south. According to a story in the Guardian, Western Australia:

. . . is facing one of its worst ever bushfire seasons, with about 3,000 fires reported since 1 January. WA police announced on Thursday that 539 of those were lit deliberately. So far 34 people, including 30 boys under the age of 17, have been charged with arson.

A little bit of what fire fighters are going through in #Northcliffe photos courtesy of @dfes_wa@9NewsPerthpic.twitter.com/qVlrip3lOJ — Ben Hennessy (@ben_j_hennessy) February 5, 2015