Older, thicker sea ice continues to disappear, ending the summer at or near the lowest levels ever seen. 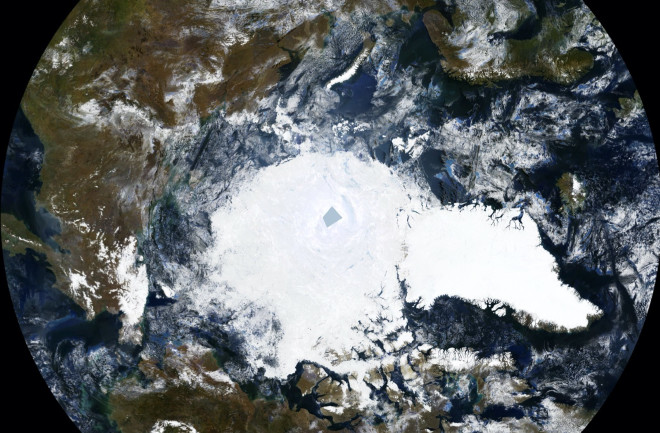 A mosaic of satellite imagery acquired between September 14th and 20th shows the extent of Arctic sea ice extent as it reached its annual minimum. According to a preliminary analysis, this occurred on the 16th of the month. (Credit: Canadian Ice Service)

In mid-July, the extent of the Arctic's floating lid of sea ice was shriveling so rapidly that it seemed to be headed toward a record low. But then weather conditions shifted and ice losses slowed.

Now, the final verdict is in from the National Snow and Ice Data Center: Arcrtic sea ice extent reached its annual, summer minimum on September 16th, coming in at 12th lowest in the nearly 43-year record of satellite observations. But even though a record low was averted by a wide margin, the ice is far from healthy. Quite the opposite.

The last 15 years have brought the lowest 15 sea ice extents in the satellite record, according to the NSIDC's latest update. Even more worrisome, the amount of older, thicker ice that has survived at least one summer melt season is at or near a record low, roughly one-fourth of the amount seen in the early 1980s.

“The health of the ice cover is not good,” says NSIDC director Mark Serreze, quoted in a story in Mongabay.

This animation comparing the age of Arctic sea ice in September 1984 and September 2019 reveals a dramatic decline. Ice that is four years old or even older is shown in white. Younger sea ice, including first-year ice, is shown in shades of bluish gray. The graph in the upper left corner quantifies how much area is covered by sea ice that is four or more years old. (Credit: Based on an animation of sea ice age by NASA's Visualization Studio)

Thick, multi-year ice is stronger, more resilient and thus less prone to fracturing and melting out than thinner, younger ice. As Gloria Dickie writes in the Mongabay story, "Ecosystems, animals, and people depend on this old ice, which has also long aided in preventing a so-called Blue Ocean Event or BOE — a future year in which nearly all Arctic ice melts, expected to occur later this century, though models disagree as to precisely when."

Declines in multiyear ice began in the early 1980s and then gained speed in the summer of 2007, when a record low in sea ice cover occurred. There have been slight recoveries since then, but the thicker ice has not come back to where it was in the 1980s, 1990s, or early 2000s.

"This loss of the oldest and thickest ice in the Arctic Ocean is one of the reasons why the summer sea ice extent has not recovered, even when weather conditions are favorable for ice retention," according to the NSIDC.

With continued warming, and weakening of the bulwark against declines once provided by multi-year ice, the overall geographic extent of Arctic sea ice has been declining dramatically over the long term. Measured over the entire satellite observation record, from 1979 to 2021, the downward trend in the minimum extent is 13 percent per decade compared to the average for 1981 to 2010.

This decline means that on average, an area of sea ice equivalent in size to the state of South Carolina has been lost — each and every year since 1979.