Should We Allow a Massive Oil Pipeline from Canada to Texas? 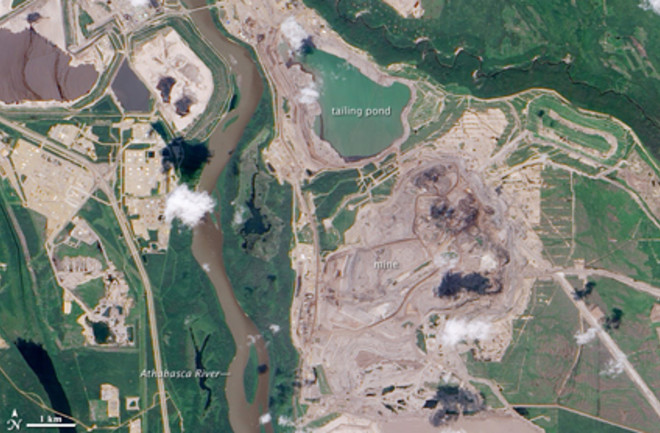 With the perpetual flow of filthy crude from BP's oil leak in the Gulf of Mexico, just about anything seems like a better energy solution than deep sea offshore drilling. One new proposal, though, has the potential for similarly disastrous environmental harm. The Keystone XL is a huge proposed pipeline that could carry oil from Canada's oil sands on a snaking path through the American Midwest and all the way down to Texas, where it will be refined. The idea has been up for public comment for months, and that period comes to a close soon. So, should we build this thing? YES There is one good thing about the project: It would be a source of energy that's not the Middle East, Iran, Venezuela, or another region or country hostile to the United States.

From an energy perspective, Keystone XL delivers one thing the United States needs: plentiful oil from a friendly neighbor. Most oil companies have invested heavily in Canadian oil sands and are firmly behind it [The New York Times].

The project would bring in another million barrels of oil per day from Canada, which is already our biggest foreign oil supplier.

A study released this month by the Perryman Group, an economic analysis firm based in Waco, concluded that the project could generate as much as $2.3 billion in new spending for Texas during construction and $1.1 billion in property taxes to local and county governments over the pipeline's operating lifetime [Houston Chronicle].

NO The oil sands are one of the dirtiest energy projects in the world. The oil is dirty to extract and dirty to refine, plus there are the transportation dangers.

The energy-intensive process emits three times more greenhouse gases per barrel than production of conventional oil, environmental groups say. Friends of the Earth, which opposes the project, estimates that the pipeline would increase greenhouse gas emissions by 38 million tons, equivalent to 6 million new cars on the road [Houston Chronicle].

Oil refining is no clean business anyway, and this oil could be even worse: watchdog groups like Air Alliance Houston

say that it causes more emissions of sulfur dioxide and particulate matter. Unsurprisingly, the company behind the project disputes this and also promises that pipelines are the safest way to transport oil. Forgive us, though, if we're still a little wary of assurances that everything will fine.

At the hearing on Tuesday, Tom Rudolph, a farmer from Circle, Mont., expressed his reservations “as a landowner directly on the route.” He called the draft environmental impact statement “insufficient,” noting in particular the lack of a “complete spill response plan” in the event of a leak. “The disaster in the gulf serves as a warning,” he said [The New York Times].

We should also consider that the Canada-to-Texas route passes through some of the most valuable agricultural land in the United States. In addition, the area is home to the giant Ogallala Aquifer, which provides drinking and irrigation water for the High Plains. Related Content: DISCOVER: Why We'll Never Run Out of Oil