September was second warmest for the globe and U.S.; 2015 likely headed for the record books

Month-by-month variation of global average temperature from the long-term mean. The first two frames of the animation show 1901 - 1950, and 1951 - 2000, respectively. The third frame shows 2001 through September of this year. Each colored box represents a specific month. V denotes major volcanic eruptions. (Graphic: Makiko Sato, Columbia University; Data: NASA/GISS; Animation: Tom Yulsman) This past September was the second warmest on record for the globe, according to numbers just released by NASA. Only September of last year was warmer in NASA's record, which dates back to 1880. And that was an extraordinarily warm month for the planet. (NOAA will soon issue its own independent analysis of global temperatures during September.) Meanwhile, the contiguous United States is really starting to heat up, with September coming in as the second warmest in a record spanning 121 years, according to the National Centers for Environmental Information. By comparison, August 2015 was much cooler in the lower 48 states, coming in as 31st warmest on record.

Source: Makiko Sato, Columbia University To illustrate what's happening globally in a novel way, I created the animation above. My starting point was a static graphic from Makiko Sato of Columbia University. I broke it into three frames, which I then used to make the animation. (Click on the thumbnail at right to see the original, static graphic. And click here to access additional imagery from Sato on temperature trends.) The animation shows the month-by-month and year-by-year evolution of global average temperatures between January of 1901 and this past September. The first two frames show 1901 through 1950, and 1951 through 2000 respectively. The last frame takes us up to September 2015. (The Vs in some of the squares show months with volcanic eruptions, which tend to cause some cooling.) I think this imagery illustrates in a particularly compelling way both the short-term variation in the climate system and the overall decadal-scale trend — which clearly is toward increasing warmth.

Through September, 2015 has been the warmest on record globally. January through September last year tied with 2010 as second warmest for the period, according to NASA's analysis. (Modified from a graphic by Makiko Sato of Columbia University. Data: NASA.) As the graphics above show, for the globe, 2015 is well ahead of 2014 so far. With a strong El Niño headed for a peak in coming months, it would be very surprising if the year didn't make it into the record books as warmest ever — and possibly by a big margin. That's because El Niño tends to give its own boost to global average temperature. While most of the globe's surface was warmer than average through September in both years, the coolness over significant portions of North America is notable. So is the obvious warmth in much of the West. Warmth (as well as dryness) in the west, and chill in the east (along with shocking winter storminess in New England) has been a very stubborn pattern for at least two years. In part we can thank what has come to be called "The Blob," a large pool of very warm sea surface temperates, or SSTs in the Pacific Ocean off the West Coast of North America.

ALSO SEE: Record algae bloom laced with toxins is flourishing in 'The Blob' — and spreading in the North Pacific

"One of the feedbacks associated with the warm sea surface temperatures has been a ridge of high pressure in the West," which has helped maintain the heat in the West, says Gregory Carbin, Warning Coordination Meteorologist with the Storm Prediction Center of the National Weather Service. "But there are hints that maybe SSTs are starting to fall in the Pacific." Watch for a future ImaGeo post about that. In the meantime, have a look at this animation to see how temperature conditions have evolved in the Lower 48 so far this year:

The monthly evolution of average temperatures year to date in the contiguous United States. (Source: National Centers for Environmental Information) I created it using maps from the National Centers for Environmental Information. By my count, the western portion of the Lower 48 has been unusually warm for six out of the nine full months of 2015 so far. Unusual coolness occurred in the interior West during just two months: May and July. Meanwhile, the situation has been reversed in the Midwest and East: This region has seen significant areas of unusual chill for six of the nine months. 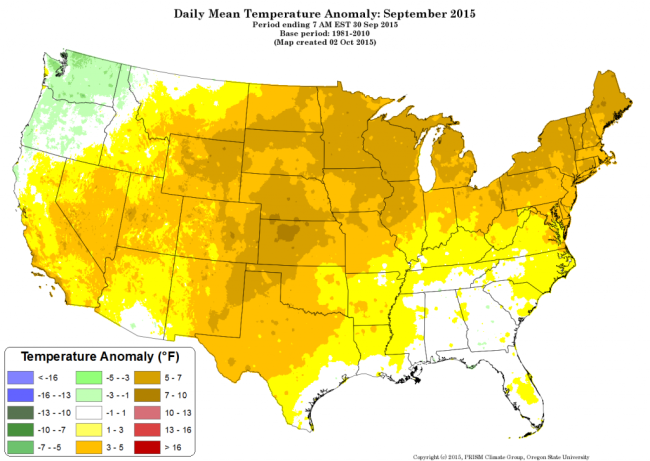 Source: PRISM Climate Group The map above suggests that unusual warmth may finally be winning out. It shows how temperatures departed from the long-term mean during September. (It basically depicts the same story as the last frame of the animation above.) As those warm colors in the map show, most of the Lower 48 experienced higher-than-normal temperatures in September, including the Midwest and Northeast. In coming days here at ImaGeo, I'm hoping to write a story on El Niño — and it will be a bit of a cautionary tale. So please check back for that.