An animation of satellite images shows the advance of a dust storm across Nevada on Tuesday, April 14, 2015. (Images: NASA Worldview. Animation: Tom Yulsman) Last week I shared a dramatic animation showing a massive sand storm sweeping across the Arabian Peninsula and across the sea to India and Pakistan. 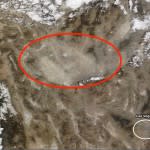 Source: NASA Yesterday, the action shifted to the desert southwest of the United States: People from southern California to Utah experienced high winds and blowing dust — including the dust storm seen in the animation above. (To get your geographic bearings, click on the thumbnail at right.) In terms of size, there was no comparison. Even so, winds gusting over 70 miles per hour and kicking up clouds of dust and sand caused mayhem on roads throughout the region. That included a 17-vehicle pileup on Interstate-80 in Tooele, Utah resulting in one fatality and at least 25 injuries.

The dust storm seen in the animation at the top of this post moved southward behind a strong cold frontal boundary. That sharp boundary is quite evident in the animation. Here's another animation, courtesy of the Cooperative Institute for Meteorological Satellite Studies:

The dust storm sweeps across southern Nevada and parts of southern California in this animation consisting of images from the GOES-13 weather satellite. (Source: CIMSS) SEE ALSO: Watch as a Massive Sandstorm Sweeps Across a Region Nearly as Large as the Contiguous United States.