Seen from space: eight days of a blazing California wildfire

The Soberanes Fire has scorched an area twice as large as Manhattan. Watch nearly its full duration so far in this animation of satellite images. 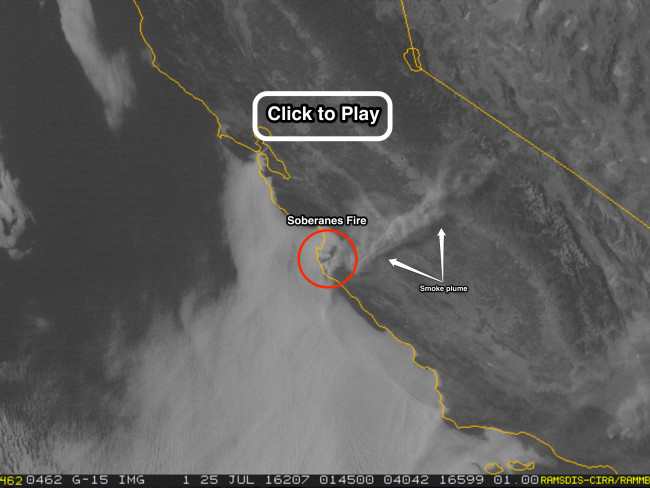 Click this screenshot to watch an animation of GOES-West weather satellite images showing the blazing Soberanes Fire between July 22, 2016, when it started, and July 30th. (Source: RAMMB) Since it started on July 22, the Soberanes Fire along California's Big Sur coast has scorched at least 33,668 acres — an area nearly two and third times the size of Manhattan. Along the way it has destroyed 68 structures and resulted in the death of one bulldozer operator. More than 5,000 firefighters are battling the blaze, equipped with 511 fire engines, 40 water tenders, 14 helicopters, six air tankers, and 67 bulldozers. And after eight days, the Soberanes Fire is still just 15 percent contained. (For the latest on the fire, check out updates from the Incident Information System here.) I decided to put together an animation of weather satellite images showing nearly the entire duration of the fire, from the morning of July 22 until today. The images come from the GOES-West satellite, which circles the Earth in geostationary orbit. Look at the annotated screenshot up top to get your bearings, then click it to watch it on Youtube. I can make out the very beginnings of the blaze on July 22 before the frame goes dark for the first time. This is nightfall. Every time you see the frame go dark, night has fallen. On the morning of July 23, day two of the fire, a thin plume of smoke can be seen clearly streaming south, almost parallel to the coast. On day three, the plume begins to blow inland, and it really explodes toward the end of the day. After you've watched the video once, refresh it, and try pausing it at the start of day three. Note the gray cloud layer that fills some of the valleys. This is California's famous coastal fog. As the day goes on, and temperatures warm, the fog burns off, shrinking back out of the valleys toward the sea. This happens several more times, and each day the fire tends to kick up as the afternoon wears on. Overall, this year’s wildfire season in the United States got off to an early start. More than 29,000 wildfires have burned more than 2.6 million acres of land so far, according to NASA. Human-caused climate change is playing a significant role in wildfire behavior in recent years. According to a 2015 report from the U.S. Forest Service:

Climate change has led to fire seasons that are now on average 78 days longer than in 1970. The U.S. burns twice as many acres as three decades ago and Forest Service scientists believe the acreage burned may double again by mid-century. Increasing development in fire-prone areas also puts more stress on the Forest Service’s suppression efforts.

Burgeoning development in the so-called 'red zone' — areas at high risk from wildfire — is consuming an ever-larger share of the Forest Service budget. From the report:

While the Forest Service and its firefighting partners are able to suppress or manage 98 percent of fires, catastrophic mega-fires burn through the agencies resources: 1–2 percent of fires consume 30 percent or more of annual costs. Last year, the Forest Service’s 10 largest fires cost more than $320 million. The cost of fire suppression is predicted to increase to nearly $1.8 billion by 2025. This trend of rising fire suppression costs...presents a significant threat to the viability of all other services that support our national forests.

I'll leave you with this view of the Soberanes Fire, as seen by NASA's Terra satellite today: 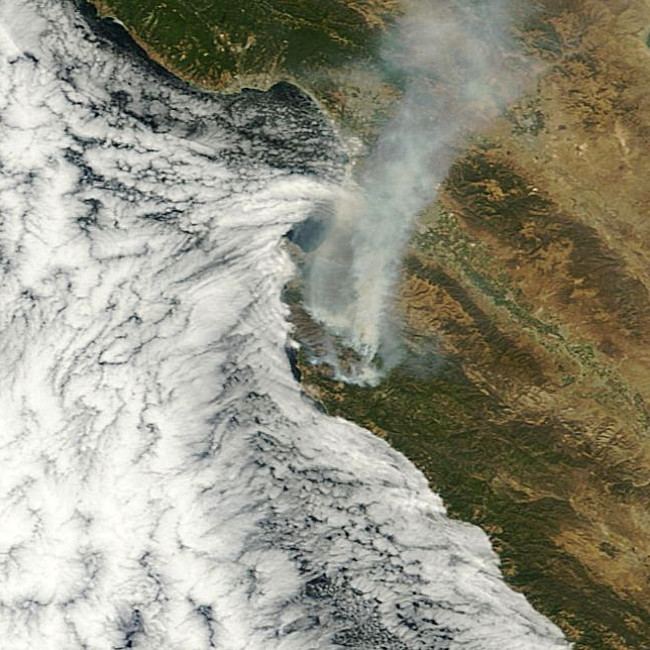 A satellite view of California's Soberanes Fire. (Source: NASA Worldview) The grayish area has already been burned, and active fire is blazing around its perimeter. A personal note: This part of the world is very special to me. I was married in 1987 along the Big Sur coast. And just 10 days ago, I was hiking in Point Lobos Natural Reserve. One of the most spectacular spots on Earth, it is within miles of the Soberanes Fire.