Sea ice globally is at a shocking low extent, thanks to record declines in both the Arctic and Antarctic 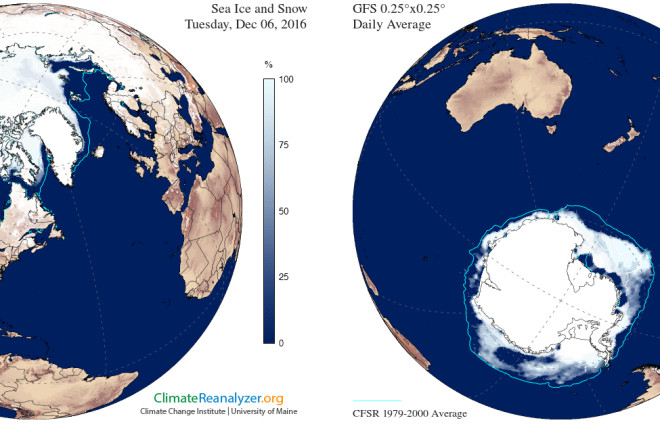 Arctic sea extent in the Arctic during November is shown on the left, and in the Antarctic on the right. The blue lines show the average extents for the month. (Source: ClimateReanalyzer.org, University of Maine) Dramatic losses in both the Arctic and Antarctic drove sea ice extent to record lows in both regions during November, the National Snow and Ice Data Center has announced. In the Arctic, sea ice extent averaged 753,000 square miles below the long-term average for November. This set a new record low for the month, which extends back 38 years to 1979. That makes it seven record lows in the Arctic this year. And we've still got one more month left. Meanwhile, the deficit in Antarctica stood at 699,000 square miles. This completely blew away the previous record low for the month, set in 1986. Put the numbers from the two hemispheres together and you get a total sea ice deficit for the month equivalent in extent to nearly half of the land area of the lower 48 states of the United States.

The red line in the time series above shows the the daily global sea ice extent for the Arctic and Antarctic compared to the long-term average, indicated by the blue line. (Source: W. Meier, NASA Cryospheric Sciences, GSFC) For a couple of reasons, I hesitated including that aggregated figure. First, the factors that influence sea ice in the two hemispheres are different. Moreover, the Arctic is in winter now, whereas the Antarctic is experiencing summer. With this in mind, an NSIDC press release today cautions that "it is unlikely that record low conditions in the two hemispheres are connected." But I decided to go with it anyway because there is one background factor that is undeniably common to both hemispheres: Humankind's emissions of carbon dioxide and other greenhouse gases are causing more and more energy to build up in the climate system, resulting in a long-term rise in temperatures around the world. The specific factors affecting sea ice in the Arctic included an unusual jet stream pattern during the month, according to the NSIDC report. This resulted in southerly winds that brought warmer air than normal into the Arctic. These winds also pushed ice northward, helping to reduce ice extent in the Barents Sea. In addition, warm water from the Atlantic managed to circulate onto Arctic continental shelf areas. “It looks like a triple whammy—a warm ocean, a warm atmosphere, and a wind pattern all working against the ice in the Arctic,” says NSIDC director Mark Serreze. The result: Exceptionally warm sea surface and air temperatures in the Arctic that retarded the growth of sea ice in key areas. “The October freeze-up was very slow and that continued through much of November,” says Walt Meier, a sea ice scientist at NASA’s Goddard Space Flight Center, quoted in a story today at NASA's Earth Observatory. Sea ice actually retreated in the Barents Sea during November — a startling occurrence given that the wintertime polar night has settled over the region, and frigid temperatures should be encouraging rapid growth of ice.

Daily extent of Arctic sea ice in 2016, and every other year since 1979. (Source: NASA Earth Observatory) The animation above illustrates the long-term decline in Arctic sea since the start of the satellite observation era in 1979. It also dramatizes just how much sea ice extent has plunged in both October and November of this year. Meanwhile, in the Southern Hemisphere, a rapid and dramatic decline in sea ice extent occurred in November, as this graph illustrates:

Monthly November Antarctic sea ice extent for 1979 to 2016. (Source: National Snow and Ice Data Center) With some obvious ups and downs, ice extent around Antarctica had been growing slowly since 1979. But look at that plunging line showing what happened in November. I can't think of any word to describe this other than shocking. Temperatures were 4 to 7 degrees Fahrenheit higher than normal around much of Antarctica during November, according to the NSIDC. In addition, winds circling the Antarctic continent shifted rapidly, bringing winds from the north. These compressed areas of low-concentration sea ice, reducing the overall extent. "The Arctic has typically been where the most interest lies, but this month, the Antarctic has flipped the script and it is southern sea ice that is surprising us," says Walt Meier.