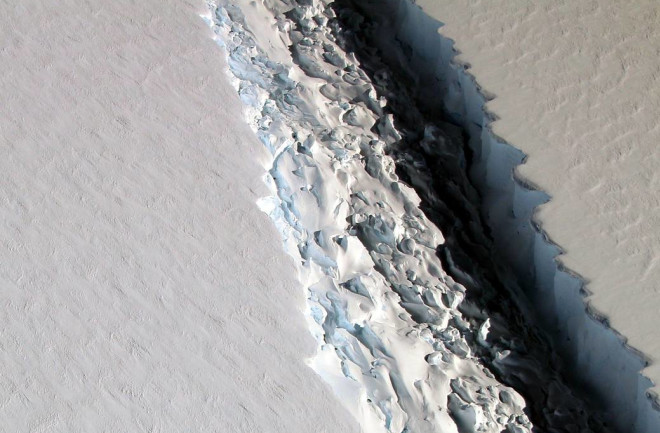 Scientists are tracking a large crack in the Larsen C Ice Shelf that will soon calve a Delaware-sized iceberg. Other floating ice shelves in the region have collapsed after similar events in recent decades. (Credit: NASA/John Sonntag)

An 80-mile crack is spreading across the Antarctic Peninsula’s Larsen C ice shelf. And once that crack reaches the ocean, it will calve an iceberg the size of Delaware. The chunk looked like it could break off a few months ago, but it’s still clinging on by a roughly 10-mile thread. Earlier this week, scientists from the MIDAS project, which monitors Larsen C, reported a new branch on that crack.

Icebergs naturally calve from ice shelves all the time. But scientists are concerned that the entire Larsen C Ice Shelf — Antarctica’s fourth largest — could eventually collapse after this iceberg drifts out to sea. The iceberg will take 10 percent of Larsen C’s mass with it, leaving the floating shelf less stable.

There’s good reason to worry. The nearby Larsen A ice shelf collapsed in 1995. Seven years later, the neighboring Larsen B crumbled after a particularly warm summer. Larsen B spanned more than 1,000 square miles and was some 700 feet thick. Yet it collapsed in about a week.

Scientists were shocked at the time. They didn’t realize that could happen to a large ice shelf. “It constantly blows my mind that these systems can go through that much change so quickly,” says University of Alaska, Fairbanks glaciologist Erin Pettit. “After maybe 100,000 years of ice being there, suddenly there’s no ice.” And a long-running monitoring effort at a doomed ice shelf not far away could help scientists predict what’s next for Larsen C.

In recent years, scientists have discovered that warmer ocean waters are washing up under Antarctica’s ice shelves, melting them from below. At the same time, warmer air is melting them from above. That’s especially true in the Antarctic Peninsula, the continent’s northernmost landmass, which is warming at least twice as fast as Earth’s overall average. These ice shelves form as glaciers slide off the continent onto the sea. And because they float, a collapsed ice shelf won’t add to sea level rise directly.

But the ice also serves as blockade. Once gone, the glaciers that feed the ice shelf will retreat much faster. No one’s ever witnessed a large ice shelf collapse in real time. With Larsen B, scientists had to go back and study satellite images from before and after. And in hindsight, they could see the ice shelf was covered in cracks and topped with meltwater. Pettit calls it forensic glaciology.

Yet, it’s not clear what delivers the deathblow to these thin, weakened ice shelves. Now Pettit and her colleagues are applying lessons learned from other collapsed ice shelves to their years-long study of the Larsen B’s last remnant. It’s an ice shelf one-third the size of Rhode Island called the Scar Inlet.

The Larsen A and B ice shelves have already collapsed on the Antarctic Peninsula. The final Larsen B remnant, or Scar Inlet, sits just north of Larsen C. (Credit: Scambos et al. 2004)

Scientists predict its demise is imminent. Pettit’s team has visited the region repeatedly in recent years. They’ve installed a suite of instruments — cameras, ocean microphones, weather stations — so they’ll have instant replay once the Scar Inlet collapses. “We have a GPS monitor sitting on top of the ice shelf that’s going to fall into the ocean when the whole thing disintegrates,” Pettit says. That should happen within a year, she expects.

The Scar Inlet looked ready to fall just a few weeks ago. Now it looks like the ice shelf will remain through the coming southern winter. And once Scar Inlet finally crumbles, the data researchers gather could help better predict the future of the much larger Larsen C Ice Shelf. “(Larsen C) has already shrunk to the size where we know it’s reaching the limit of its stability,” Pettit says. “This might be one of the last big icebergs that goes off this ice shelf before it does do a full collapse.”

And even if Larsen C holds steady as the Delaware-sized iceberg drifts away, warmer temperatures on the Antarctic Peninsula don’t bode well for its future. “It really is down to the last decades of the life of this ice shelf,” Pettit says.

Larsen C is the largest ice shelf on the Antarctic Peninsula, but there are much larger floating ice masses around the continent. As Antarctica warms, they too could be at risk. “If the fourth largest ice shelf in Antarctica disintegrates, bigger ice shelves with bigger drainage basins could also be in danger,” says Ala Khazendar, a NASA JPL ice shelf scientist.