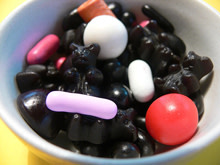 Everyone loves licorice. OK, that's not true. But even if you loathe the smell of black jelly beans, sambuca, and root beer, put aside your distaste for a minute: Licorice is in trouble, and science might have the answer. Licorice comes from the root of a plant called

Glycyrrhiza glabra, and it's about 50 times sweeter than ordinary sugar. So its sweetener is often used as an additive, and it amounts to a $40 million-per-year business. But because of that, the wild plant is being over-harvested in some places, and that land is giving way to desertification. This is happening especially in China, one of the first places where licorice was identified and used.

But in a study in the Proceedings of the National Academy of Sciences, Japanese researcher Toshiya Muranaka says that he identified the key enzyme in the plant that catalyzes the making of the sweetener. With that knowledge, he says, it might be possible to genetically engineer other plants to create the sweetener, but right now Muranaka and his team are only part of the way there. So hold tight, licorice-lovers. And if you're worried about the environmental impacts of harvesting too much wild licorice, why not grow your own?