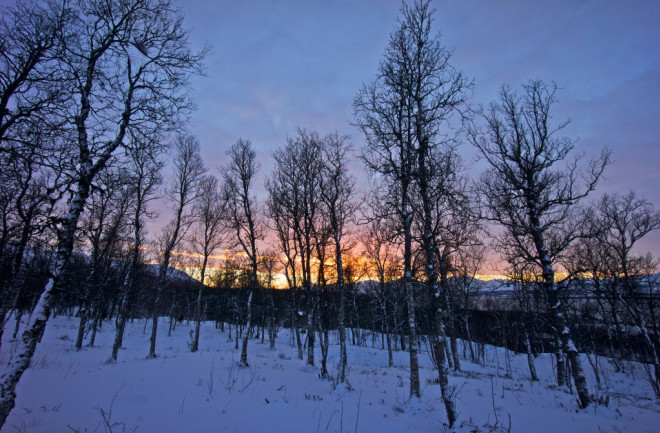 Sunset as seen from the Arctic island of Tromsøya in late January. (Photo: copyright Tom Yulsman) I was lucky enough this past January to witness an event that happens only once a year in the Arctic: the return of the Sun after a long winter absence. And as the picture above suggests, it was stunningly beautiful. I took the picture on January 20 from the top of Tromsøya island, on which most of the city of Tromsø, Norway sits. The sun appeared in a gap between distant jagged mountains for what seemed like less than a minute, and then vanished once again.

The first sunrise and sunset of the season blended together over the course of about a minute. But with the sun lingering just below the horizon, the alpenglow on jagged peaks lasted for at least an hour. (Photo: copyright Tom Yulsman Click for a larger version.) But the sunrise and sunset light lasted for many hours. Two days earlier, when I landed at 1:30 p.m. under an almost night-dark sky, it was raining. I was in Tromsø to attend a conference on quickening efforts to open the so-called Arctic frontier. Mind you, rain is not unheard of in winter in this city above the Arctic Circle. Thanks to a tongue of the Gulf Stream that flows just offshore, Tromsø’s climate during the cold season is more akin to Boston than, say, Barrow, Alaska, which is roughly at the same latitude. Even so, rain in winter above the Arctic Circle somehow seemed appropriate, given the subject of the Arctic Frontiers conference I was attending: The world is warming, and that’s bad overall. But it is opening new opportunities to exploit resources in the high north, most especially fossil fuels. Which, of course, will only make the warming worse. Welcome to the polar paradox. I discussed the warming, and resulting shrinkage of Arctic sea ice, as well as the huge oil and gas resources in the Arctic, in Part 1 of this two-part series. In that piece, I described how the Arctic is warming faster than any other region on Earth. And I detailed the enormous reserves of oil and gas believed to be awaiting discovery there — perhaps as much as 22 percent of the undiscovered, technically recoverable resources in the world, according to the USGS. Today, I want to focus on the idea of a new Arctic frontier, and how it played out at the conference, by the same name, in Tromsø.

A boat in dry dock along the waterfront of Tromsø — a bustling hub of what Norway and other northern nations are seeing as the new "Arctic frontier." (Image: copyright Tom Yulsman) With the towering construction crane and the sturdy boat in dry dock, the photo above symbolizes what’s happening in the city — and parts of the Arctic more generally. Tromsø is positioning itself as an emerging support hub for the new Arctic frontier, with research institutes, a university, and impressive infrastructure.

Jens Johan Hjort, mayor of Tromsø, eagerly talks about his cosmopolitan city. (iPhoto copyright Tom Yulsman) The Norwegian government also seems to want to showcase the city's role in the opening of the Arctic region to increasing exploitation of resources. So much so, in fact, that it covered journalists’ travel expenses to attend the Arctic Frontiers conference. I received an invitation to participate in late fall. I was torn. Journalists are supposed to maintain independence from sources. On the other hand, journalistic organizations have cut back so much that there is very little money available to pay for reporters to cover issues like the polar paradox. Here was the dilemma that I and other journalists faced: Decline the invitation to have travel expenses paid, in which case the plans now being made to exploit resources in a warming Arctic would receive less attention than they deserved. Or accept the invitation, be transparent about it, and do our best to air out the serious issues surrounding the polar paradox honestly and fairly — but leave ourselves open to criticism that we had lost our independence. Welcome to another paradox of the emerging Anthropocene epoch: The folks who are eager to develop their Arctic oil reserves — which will add to global warming — were more than willing to help us cover the issue with travel support. There were no strings attached. (Other than my own loss of sleep while wrestling with the issue.) In the end, I chose to accept the support and cover the issues. I hope what follows will speak for itself.

Military officers also attended Arctic Frontiers, highlighting the geopolitical significance of the region. (Photo: copyright Tom Yulsman) A few weeks before the Arctic Frontiers meeting, Jane Lubchenco, Administrator of the U.S. National Oceanic and Atmospheric Administration, spoke about climate change at the American Geophysical Union conference. “Conditions in the Arctic are changing in both expected and sometimes surprising ways,” she said as part of a preview by her agency of its latest Arctic Report Card. “What happens in the Arctic doesn’t always stay in the Arctic,” she noted. “We’re seeing Arctic changes that affect weather patterns in the U.S.” Quoted by Richard Monastersky in the journal Nature, Donald Perovich, a researcher at Dartmouth College, adopted a somewhat darker tone: “The Arctic is one of Earth’s mirrors, and that mirror is breaking.” Flash forward a few weeks to the Arctic Frontiers conference in Tromsø.

Harald Loeng, Research Director of the Norwegian Institute of Marine Research. (Photo: copyright Tom Yulsman) “There’s always a lot of pessimistic comments about the climate change,” said Harald Loeng, Research Director of the Institute of Marine Research in Bergen, Norway, and leader of European Polar Board. The idea that the Arctic mirror is breaking is “maybe a bit too pessimistic,” he said. “It depends on how you look at it. People can focus too much on the negative impacts of climate change.” To be sure, Loeng is no Pollyanna. He is, of course, quite aware of the large stretches of open water opening in the Arctic Ocean in summer, the feedbacks this can have on weather elsewhere, and the tradeoffs inherent in climate change. Even so, his comments about the possible positive impacts of climate change neatly summed up the gestalt of the conference. Over the course of five days, diplomats and government officials talked about cooperation in opening the Arctic. (A point that former Secretary of State Hillary Rodham Clinton emphasized during her own visit to Tromso last June.) Military brass discussed arrangements that needed to be made for responding to emergencies, such as a major oil spill in the hazardous, icy waters of the Arctic. A host of scientists discussed everything from shrinking Arctic sea ice to changes to fisheries in the Arctic region. And there was at least one activist who tried to temper the enthusiasm for the positive side of the polar paradox with a little sober reality. We'll get to her in a minute.

Espen Barth Eide, the Norwegian Minister of Foreign Affairs. (Photo: copyright Tom Yulsman) But first, let's turn to Espen Barth Eide, the Norwegian Minister for Foreign Affairs. “Climate change is bad news,” he said. “Every conference should begin by making it clear that we are not rejoicing the fact that ice is retracting.” That was one of his only references to the bad news, if not the only one. Almost all of the rest of his talk focused on the opening Arctic frontier. “There are enormous opportunities all around the Arctic region,” Eide said. “More areas are becoming accessible to economic opportunities.” And Norway should definitely “exploit” them. To paraphrase George Washington Plunkitt, one of the old-time Tammany Hall bosses of New York City, what nation wouldn’t see its opportunities and take them? I thought I might hear a somewhat different perspective from Egil Olli, president of Norwegian Sami Parliament. The Sami are the indigenous people of northern Scandinavia. Mining and other industrial activities in the far north pose a threat to their traditional way of life, centered on reindeer herding.

Egil Olli, president of Norwegian Sami Parliament. (Photo: copyright Tom Yulsman) I was wrong. “Make us all winners,” Olli said, adding that governments and businesses should “promote the rights of indigenous people.” Karl Bildt, Sweden’s Minister of Foreign Affairs, and chair of the Arctic Council, picked up on the polar paradox: “Global warming is a fact. We have to fear that it will go on. Every week we see . . . new coal-fired plants come online in China and India. We see the consequences here.” At the same time, “economic opportunities are booming and will continue to boom in the Arctic region,” he said. The take-away? China and India are now the up-and-coming climate-changing nations. So we might as well take advantage of the opportunities this provides up here in the warming north. As I’m sure George Washington Plunkitt would agree, it all makes perfect sense. What nation would find it easy to resist opportunities for economic development? Even so, I expected some acknowledgement of the cognitive dissonance induced by the “global warming is bad/but it will be good” meme. Although he didn't do that explicitly,Paul Wassmann, an expert in marine ecology at University of Tromsø, grappled forthrightly with the negative impacts of climate change. "What I care about is the marine resources and the significant wealth they create for the high north," he said. "We are talking about some of the most productive ecosystems found in the waters adjacent to the Arctic Ocean." Those ecosystems, he pointed out, are home to cod, capelin,Greenland halibut, Kamchatka king crab, whales, seals and other marine mammals. Arctic air temperatures are expected to warm 6 to 10 degrees more than the global average by 2100, he pointed out. How will ecosystems change as this occurs? Moreover, which Arctic nations might benefit from increases in fish stocks? Which ones might lose out as a result of decreases? And will the result be, on balance, positive or negative? The answers are not known with any clarity.

Maren Esmark, head of the Norwegian Society for the Conservation of Nature. (Photo: copyright Tom Yulsman) And that brings me finally to one of the very few activists at the conference, Maren Esmark, General Secretary for the Norwegian Society for the Conservation of Nature. She showed a map of decreasing sea ice and said, “Do you see opportunity or documentation of climate change? Are you excited? Or are you scared about the future? I am scared.” She noted that Norway had built its great economic wealth based in large measure on developing its oil and gas resources. As a warming Arctic lures Norway and other nations even farther north in pursuit of fossil fuels, it will be “people to the south who will feel the worst effects of climate change.” Nations like Bangladesh, which already is grappling with rising sea level. Esmark advocates strongly for an international agreement to limit emissions of carbon dioxide and other greenhouse gases. “If we now invest big money in developing an oil and gas industry in the north, will these countries then be willing to commit to an international agreement in 2015?” And what of the polar paradox? “It is a moral paradox that I just do not understand.”