Two enormous spikes of melting hit the Greenland Ice Sheet in July. But copious snow cover from earlier in the summer blunted the impact. 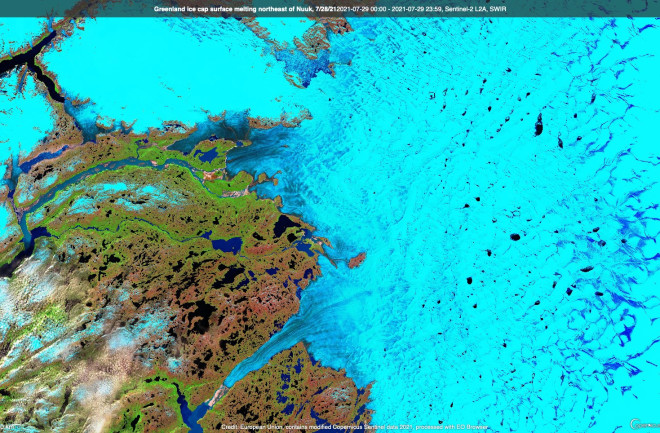 This false color view of Greenland near Nuuk was acquired by the Sentinel 2 satellite on July 29, a day after the island's giant ice sheet experienced a massive episode of surface melting. In the image, the ice sheet is to the right, and dark blue indicates liquid water. (Credit: Modified Copernicus Sentinel data processed by Tom Yulsman via EO Browser)

You may have seen the headlines back in July: Thanks to a heat wave, enough ice melted during one day in Greenland to cover Florida in two inches of water.

Based on those headlines, you may have gotten the impression that the island's ice sheet had gone into a death spiral of melting. In reality, although the long-term trend remains quite serious, so far this summer snow has actually saved the day in Greenland.

Without quesiton, the July 28th event was enormous. About 340,000 square miles of the surface of the Greenland Ice Sheet — 54 percent — experienced melting. That's an area slightly bigger than California, Oregon and Washington combined.

The two maps at the top of this graphic show the extent of surface melting (in pink) on the Greenland Ice Sheet on July 19 (left) and July 28 (right). The bottom map shows average air pressure for July 27 to 29, 2021. The big difference between low pressure (blue and purple) on the left and high pressure (red) on the right helped produce an atmospheric river of warm air that drove the second bout of melting on July 28. (Credit: PROMICE and National Snow and Ice Data Center )

All told, 12.5 billion tons of ice melted and ran off into the sea during that one event, according to the National Snow and Ice Data Center. And it was not the first big melting spike this summer. Another occurred nine days earlier, when about 40 percent of the ice sheet surface melted.

But there was something that news outlets like the Guardian did not report concerning these events, something that would have presented a more nuanced picture. Because of copious snowfall earlier in the summer, the ice below had been protected from melting through much of the melt season. As a result, up until the two big melting spikes in July, the Greenland Ice Sheet had actually gained ice during 2021.

As the NSIDC explains it, the snow blunted the potential impact of the two melting spikes "by limiting the exposure of bare ice and reducing runoff."

Moreover, the daily rate of ice loss (scientists call it "ablation") on July 28th wasn't the worst ever seen. It ranked as third worst. On July 11, 2012, 12.9 billion tons were lost, making that event the second worst on record. The highest daily loss occurred on July 31, 2019, when 16.1 billion tons of Greenland's ice melted.

The bottom line is this: As of August 11th, when the NSIDC published details of the melt season thus far, Greenland had lost a lot of ice, but the net runoff was actually below average for that time of year.

More important than what happens on any given summer day in Greenland is the long-term trend — and that is very concerning.

Between 1992 and 2020, the Greenland Ice Sheet lost about 4,890 gigatons of ice (and perhaps as much as 5,640 gigatons), according to the recent report from the Intergovernmental Panel on Climate Change. "Giga" is a billion, so this means about 5 trillion tons of Greenland's ice cap was lost to the sea just during that period, contributing about a half inch to rising seas.

Sea level rise from all sources — melting ice from Greenland, Antarctica, and glaciers around the world, plus expansion of ocean water as it has heated up — is already causing large problems in many coastal areas.

For example, in Bangladesh, a country smaller than Illinois that's home to 165 million people, monsoon rains in 2020 caused flooding so bad that about a quarter of the country was underwater at the beginning of June. All told, 1.9 million people were displaced from their homes during the monsoon season, according to the International Displacement Monitoring Centre. Both sea level rise, and the tendency of storms to carry more water as the climate warms, were major contributors to this disaster.

Of course, Bangladesh isn't the only country experiencing serious impacts from sea level rise along with wetter storms. For example, Hurricane Sandy caused mayhem up and down the East Coast in 2012. In New York City, the storm flooded all subway tunnels under the East River, and all road tunnels but one into Manhattan. All told, damages from Sandy have been estimated at $60 billion. Research published this year shows that about $8 billion of that total is attributable to sea level rise from human-caused climate change. And flooding affected 71,000 more people that it would have otherwise.

So far, the catastrophes we've seen with much less sea level rise have been bad enough — a fact that argues for swift and deep cuts to emissions of the greenhouse gases that are heating up our planet.