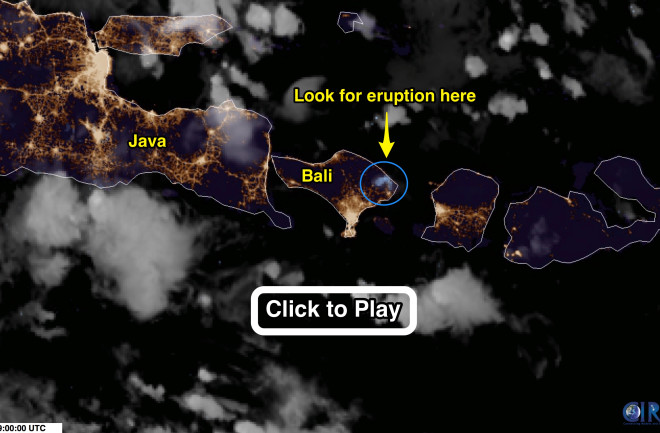 An animation of satellite images shows Mount Agung in Bali, Indonesia erupting. The images were acquired by Himawari-8, a Japanese weather satellite, between 12:00 UTC on Nov. 26th and 8:00 UTC on Nov. 27th. (Note: When the animation page comes up, make sure to click on 'play' there. Source: SLIDER BY RAMMB/CIRA @ CSU) With magma boiling at its peak and swelling its body from within, Mount Agung in Bali, Indonesia has awakened from more than a half century of slumber. Agung has been rumbling since August. Now it is propelling ash thousands of feet into the atmosphere, prompting evacuations of thousands of people from the danger zone around it and causing authorities to halt flights in and out of Bali's international airport. (Flights have resumed today to allow stranded travelers to get out.) Dramatic views of the eruption have been captured by photographers on the ground. And now you can watch what it looks like to satellites in orbit. I created the animation above using a cool, public website called "Satellite Loop Interactive Data Explorer in Real-time," or SLIDER. It consists of images acquired by the Himawari-8 weather satellite between 12:00 UTC on Nov. 26th and 8:00 UTC on Nov. 27th. Click on it and then make sure to press play on the animation page that comes up. (You may have to be patient for the animation to fully load.) The animation begins at night. Watch for flickering blue pixels. My guess is that the satellite sensor is detecting flashes from erupting lava. Another possible explanation is that lightning is occurring in clouds billowing up from the volcano. There are also fainter bluish emissions that are likely indicative of ash plumes. As day turns to night, watch for brownish plumes of ash spewing from the summit of Agung.

Data from NASA’s Aura satellite show the high sulfur dioxide (SO2) concentrations associated with the volcanic eruption of Mount Agung in eastern Bali, Indonesia, on Monday, November 27, 2017. (Source: NOAA/NASA) Ash isn't the only thing Agung is propelling into the atmosphere. The volcano also has been emitting large amounts of sulfur dioxide. While invisible to our eyes, satellite sensors can detect the SO2 — a gas that can harm people and also alter the climate. Sulfur dioxide spewed into the atmosphere by a volcano like Agung reacts with water to produce sulfuric acid aerosols. If an eruption is powerful enough to propel these aerosols into the stratosphere, they can cool the global climate by reflecting sunlight back into space — and they can stay there for a number years.

Global mean surface temperatures from Berkeley Earth (black dots), major volcanoes (shaded areas), and estimated temperatures based on human and natural radiative forcing (red) with a 1963-size Agung eruption in mid-2017 (blue). The baseline period is 1961-90. (This graphic was created by Carbon Brief for an analysis of Agung's potential climate impact.) Mount Agung last erupted massively in 1963. That natural disaster killed more than 1,000 people. It also had an appreciable climate impact, reducing the global average temperature by about 0.1 degree C. Should the current activity at Agung lead to an eruption of that magnitude, global temperatures could drop by 0.1 to 0.2 degrees C, according to data scientist Zeke Hausfather, writing in an analysis at the Carbon Brief website. https://twitter.com/janinekrippner/status/934639758680252417 The time-lapse above shows a massive phreatic eruption from Agung on Nov. 25th. Phreatic eruptions occur when water comes into contact with lava or other intensely hot material, causing an explosion of steam, water, ash, and rocks. As big and bad as the Nov. 25th eruption looks, it is nothing like the one in 1963. So is Agung definitely headed for something like that? Unfortunately, there was very limited monitoring of the precursors to the 1963 eruption, according to Tracy K.P. Gregg, a geologist at the State University of New York at Buffalo. And as she puts it in an excellent science backgrounder at The Conversation:

We don’t yet know if Agung volcano is currently giving us two weeks, two months or two years (or more) of warning because we don’t know precisely what it did before its 1963 eruption.

If you want to monitor the volcano in realtime, check out this webcam: https://youtu.be/islcMmfHHqE