Satellites Map Out Seafloor as Never Before

Thousands of previously unknown features have been identified from above. 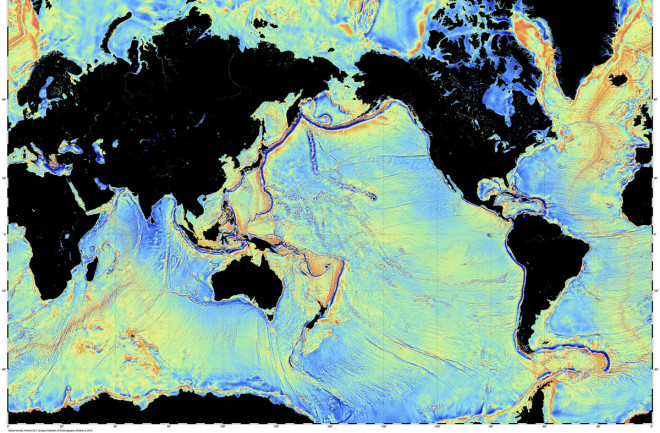 Seafloor gravitational pull, captured via satellite. Red areas have the most pull and the highest elevations. | David Sandwell/Scripps Institution of Oceanography, UC-San Diego

Sign up for our email newsletter for the latest science news
A gravity model of the Atlantic Ocean shows earthquakes over 30 years (red) and details of the seafloor's tectonic features. | David Sandwell/Scripps Institution of Oceanography, UC-San Diego

What flies above has radically changed our knowledge of what lies beneath. New maps of Earth’s seafloors derived from satellite data have identified thousands of previously unknown seamounts, faults and other tectonic features.

Researchers at Scripps Institution of Oceanography at the University of California, San Diego, created the maps by analyzing untapped data streams from NASA’s Jason satellite and the European Space Agency’s CryoSat-2 satellite. Unlike traditional shipboard sonar measurements — which bounce waves off the seafloor and have mapped out a mere 20 percent of the planet’s oceans — the satellites captured subtle variations in Earth’s gravitational pull at the water’s surface. The variations are caused by geologic features sometimes thousands of feet below the waves and even buried beneath thick sediment.

Scripps geophysicist David Sandwell and his team developed an algorithm to crunch the data, accounting for ocean waves and tides. Their new maps will assist submarine navigation and oil exploration, but they also provide crucial new information for researchers studying plate tectonics.

Published in Science in October, the open-source maps also have been incorporated into Google Earth. Sandwell’s team plans to release updated maps as early as this year.