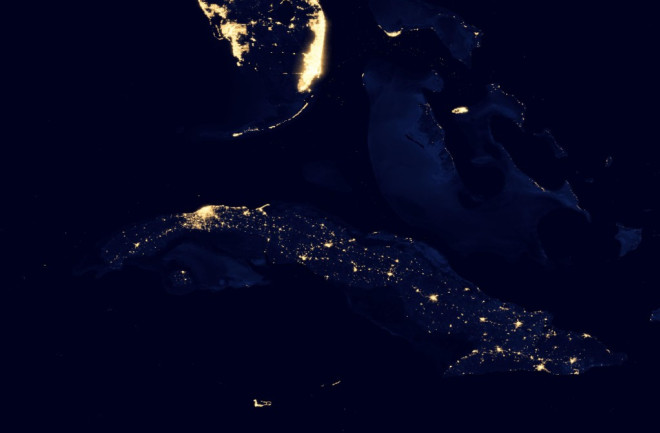 A satellite view of Cuba and Florida at night. (Source: NASA Worldview) Yesterday's announcement was historic: restoration of full diplomatic relations between the United States and Cuba. And that got me to thinking of how satellite imagery could contribute to public debate now swirling around the move. For 53 years, the U.S. embargo of Cuba, intended to help bring an end to the Cuban regime, has helped to stifle development there. This year, for example, the nation's economy grew at a paltry 1.4 percent, according to the government's no-doubt inflated figures. The embargo itself isn't the lone cause of economic distress. A rigid, centrally planned economy in one of the last remaining Communist nations on Earth shares the blame as well. Whichever factor plays the more important role, you can see the impact on Cuba in the image above based on data acquired by the Suomi NPP satellite in 2012. The Florida peninsula seems to point a bright finger toward the darker landmass to the south: Cuba. Florida's bright lights are a testament to the relative vibrancy of its economy. The densely populated urban corridor anchored by Miami on the east coast gives way to the graceful and well lit arc of the Florida Keys. Across the Straits of Florida, Havana, Cuba's capitol, is fairly obvious. But most of the rest of the country is quite dark compared to Florida, and even the small island of Jamaica to the south. The New York Times described Cuba's economic situation in a story today:

The Cuban economy has a long list of ailments, including a shortage of cash, brain drain, anemic foreign investment and a scarcity of food production, with nearly 80 percent of its food imported, said Ted Henken, a professor of Latin American studies at Baruch College in New York.

I think the image of Cuba at night illustrates this quite well. To mark the Obama Administration's historic and controversial announcement, I thought I'd share some other satellite imagery of the island as well:

Source: NASA Worldview This cloudless view of Cuba consists of a composite of satellite images acquired in 2004, part of NASA's Blue Marble series.

Landsat 7 captured this natural-color image of Cuba. Havana, the capitol city, is the grey-brown smudge along the northern coastline. (Source: NASA Earth Observatory) And here's a closer, more detailed view, acquired by Landsat 7 on April 3, 2007. It shows the western end of Cuba — the largest of the Caribbean islands. Havana is at upper right. The relatively shallow seafloor on the southern side of the island accounts for the light blue color of the waters there. The sea is much deeper on the north side, accounting for the deep blue color. Here, "warm water from the Gulf of Mexico gushes through the narrow but deep slot to form the Gulf Stream," as NASA's Earth Observatory, source of this image, puts it. Lastly, green forested slopes of a mountainous region contrast with a checkerboard of farmlands.