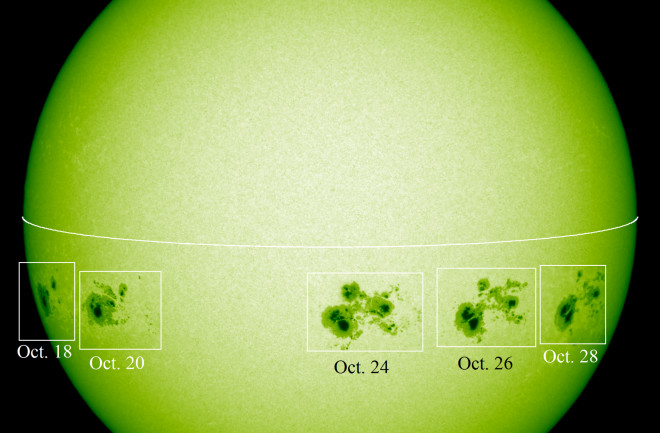 A composite of images captured by Japan's Hinode spacecraft shows the evolution of massive sunspots during two weeks in October, 2014. (Source: Hinode Science Center/NAOJ) Looking a bit like nasty bruises, a cluster of truly massive sunspots appeared on the Sun's surface starting in mid-October. Their collective surface area, measuring 66 times larger than the Earth's cross section, was the largest in the last 24 years, according to the National Astronomical Observatory of Japan. The sunspots produced six major solar solar flares before the sun's rotation swung them out of view to the Hinode spacecraft in early November, which captured the images above. You're looking at multiple images superimposed on a single one of the sun showing the evolution and movement of the sunspots from the time they first rotated into Hinode's view on Oct. 18th (left side of the image) to when they moved out of sight. The sunspots have since re-emerged and are facing toward Earth again. They are capable of producing additional solar flares and accompanying explosions of solar material — toward us. An explosion like this, called a coronal mass ejection, or CME, hurls a huge cloud of charged particles and bits of solar magnetic field out into space at millions of miles per hour. When struck by a CME, Earth's protective magnetic bubble — called the magnetosphere — can shake and quiver, triggering a geomagnetic storm that can disrupt communication systems and damage satellites and electrical grids. When the sunspots were previously facing Earth, their flares failed to produce CMEs. But now that they're facing us again, that may change, according to NASA scientist Holly Gilbert, interviewed by Space.com recently:

"This time around, it's more likely to have some coronal mass ejections associated with it, even though the solar flares might be smaller," said Gilbert, chief of the Solar Physics Laboratory at NASA's Goddard Space Flight Center in Maryland.

A white light image of the sunspots captured by Hinode on Oct. 24, 2014. (Source: NAOJ/JAXA) Sunspots form in areas where strong magnetic fields obstruct giant upwellings of heat from the Sun's interior to its surface. As a result, these areas are cooler — and thus darker. Areas of strong magnetic fields on the Sun often produce solar flares. As NASA describes them:

In a matter of just a few minutes they heat material to many millions of degrees and release as much energy as a billion megatons of TNT. They occur near sunspots, usually along the dividing line (neutral line) between areas of oppositely directed magnetic fields.

If you look carefully at the large cluster of sunspots in both the broad view at the top of this post and in the closeups, you may be able to see that it consits of two sets of spots. This is quite typical, with one set having a north magnetic field, while the other set featuring a south magnetic field.

With this culster, however, the situation is not quite so clearcut, with magnetic field lines between the different sunspots being quite tangled. This phenomenon frequently leads to strong flaring.