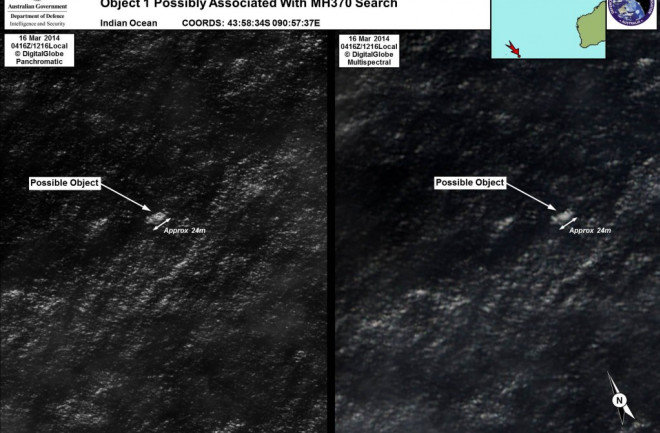 Satellite images released by the Australian government show possible objects floating in the Indian Ocean that could be wreckage from Malaysian Airlines flight 370. The images are of the same object. One is panchromatic, meaning it is based on all wavelengths of light falling on each pixel. The other is multispectral, meaning it is based on specific wavelengths. (Source: Australian Maritime Safety Authority) Could floating objects seen in satellite images of the Indian Ocean off the coast of Australia be wreckage from the missing Malaysian Airlines jet that disappeared on March 8? The Australian government thought the satellite images above, and another pair lower down in this post, warranted a search by aircraft. But the first try has turned up nothing — because of limited visibility due to clouds and rain, as this Tweet from the Australian Maritime Safety Authority states:

Here's a map of the area in the Indian Ocean that was searched by the Australians today:

Source: Australian Maritime Safety Authority And here's what that area of the Indian Ocean looked like to NASA's Aqua satellite today:

Extensive cloudiness obscures parts of the Indian Ocean off the west coast of Australia, as seen in this image based on data from NASA's Aqua satellite. (Source: NASA) To my eye it appears that the area being searched is underneath that big patch of cloudiness seen this image. Let's hope it clears. Lastly, another pair of images showing another a second possible object:

Source: Australian Maritime Safety Authority As more remote sensing and other kinds of imagery come in, I'll post them here at ImaGeo. So stay tuned.