Where sea ice should already be present, there are just vast swaths of open water. The cause: storminess and massive inflows of warmth.

Alaska's Norton Sound on the Bering Sea is seen in this animation of images from NASA's Terra satellite. One image, acquired on Nov. 25, 2009, shows fractured sea ice filling the sound. The other, acquired on the same date this year, shows mostly open water. (The dark area to the right was not imaged by the satellite because of the polar night. Images: NASA Worldview. Animation: Tom Yulsman) With winter descending on the Arctic, sea ice should be expanding rapidly in the Bering and Chukchi seas off Alaska and eastern Siberia. But instead of sea ice, satellite sensors see thousands of square miles of open water stretching between the Alaska and Russia. "It’s the lowest ice extent on record for this time of year for the combined basins," according to Rebecca Lindsey of the National Oceanic and Atmospheric Administration. I created the animation above using images from NASA's Terra satellite to help show what's happening in the region. The images are centered on Alaska's Norton Sound, an inlet of the Bering Sea. In the image, north is toward the lower right corner. The black area, by the way, is where polar night has already fallen. With no sunlight to illuminate the scene, the satellite could not image the ground. The river delta toward the top and just left of center is the Yukon–Kuskokwim Delta. To give you a sense of scale, it is about 50,000 square miles in size, making it almost as large as Iowa. In the 2009 image, captured on Nov. 25th, Norton Sound is choked with fractured sea ice. In the one acquired on the same day this year, some ice is beginning to form along the shores. But mostly, all we can see is open water. (Make sure to click on the animation to open it, and then click on it again to zoom in.) 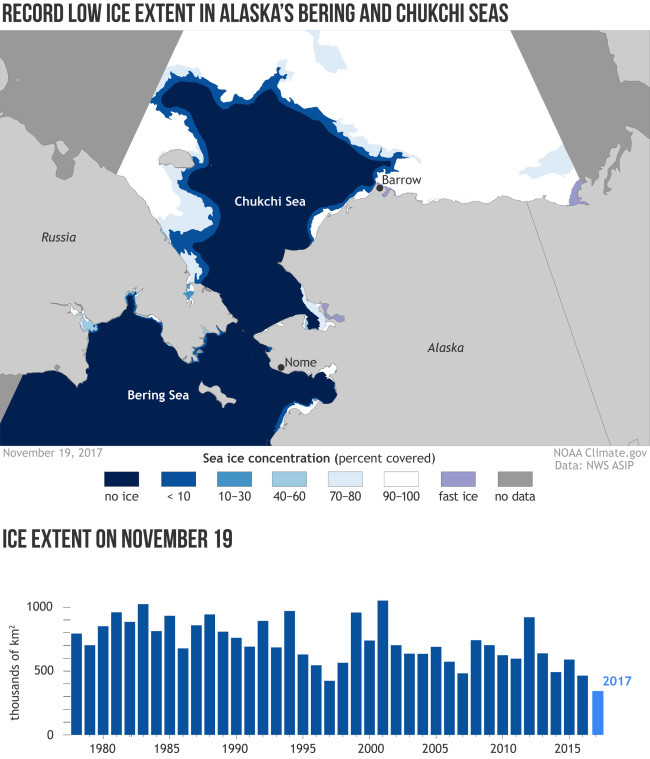 Source: NOAA Here's a map of the sea ice concentration in the Bering and Chukchi seas on Nov. 19th, along with a bar graph illustrating how conditions now compare to every other year since 1978, the year modern satellite monitoring began. "Certainly we've never seen anything quite like this before," said Mark Serreze, the director of the National Snow and Ice Data Center, quoted by Sabrina Shankman in a story for Inside Climate News. This past summer, unusually warm water streamed north from the Pacific toward the Bering Strait between Russia and the United States, helping to melt out sea ice earlier than usual. As a result, areas that would have remained covered with reflective sea ice were open for much longer than otherwise would have been the case. And the relatively dark surface of the sea was able to absorb a lot of energy from the sun. This fall, that banked solar heat is preventing sea ice from forming in the region. At the same time, strong storms have helped break up any sea ice that has managed to form. And as Shankman describes it in her piece, there is little hope for recovery any time soon. That's because the storminess is expected to continue for awhile. The lack of sea ice and the storminess have had significant impacts on local people living along the shores of the Bering Sea in Alaska. Check out Shankman's story for details on that. (See above for the link.) 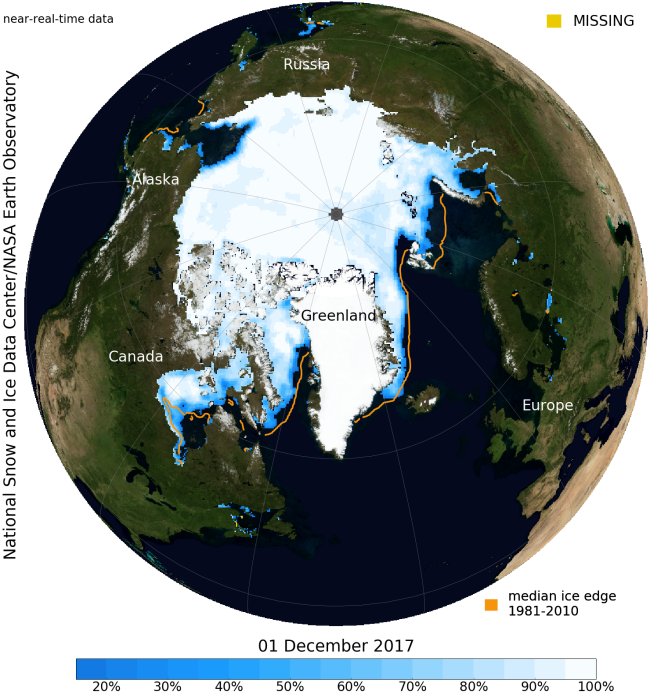 Source: NSIDC Overall, Arctic sea ice is running very low right now compared to the long-term average, but not at record lows. The map above shows the concentration of sea ice in the region, with the orange line indicating the median ice edge for the 1981-2010 period. The gaping black hole in the Chukchi Sea off Alaska's northwest coast is particularly noteworthy. 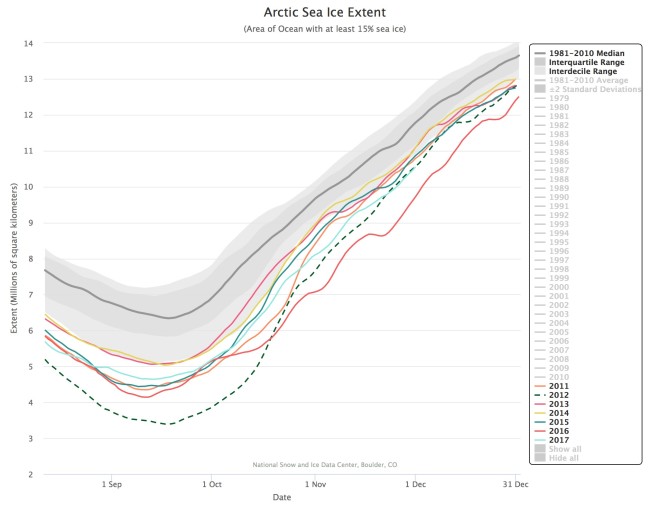 Source: NSIDC Thanks in no small measure to the lack of ice in that region, Arctic sea ice overall is running neck and neck with 2012 for the dubious title of second-lowest-extent for this time of year. In the graph above, 2017 is represented in blue, 2012 with the dashed green line, and 2016 — which experienced even less ice — in red. As the graph shows, 2012 experienced the very lowest Arctic sea extent on record. It happened during September, as it does every year — at the end of the warm season in the Arctic. This year defied expectations, with the sea-ice-extent minimum coming in as eighth lowest on record. 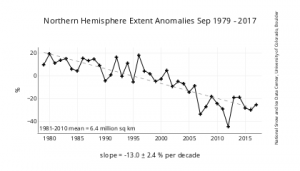 Source: NSIDC The Arctic has a long winter ahead of it. It's anyone's guess how much ice will accumulate, and then how much will melt out in summer. Last March, when sea ice reached its maximum winter extent, scientists were shocked at how little had formed. Yet the ice bounced back to a somewhat surprising extent. While Arctic sea ice extent does bounce around a bit from year to year, the overall trend couldn't be clearer — as the graph above shows. It charts extent over time during September. Scientists unequivocally say this is a result of human-caused warming of the planet — which is occurring faster in the Arctic than anywhere else on Earth.