Retreating For a Few Days 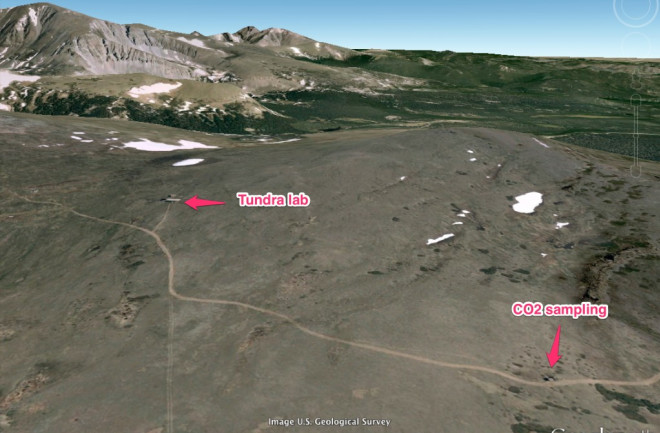 Niwot Ridge in the mountains west of Boulder, Colorado, is the site of many ongoing research projects, including the second-longest-running record of atmospheric carbon dioxide. The tundra lab sits at about 11,600 feet. This view of the ridge is looking to the north. (Image: Google Earth) I'm heading up into the mountains until Wednesday morning — on a retreat with a group of fellow science journalists, in part to talk about how we should be adapting to the digital communication revolution. (I'm not sure that this is what we are supposed to be talking about, but it's what I want to talk about!) That revolution is turning out to be as epochal as the one triggered by the invention of the printing press. No surprise here, but it is posing serious challenges to how we do our work as science journalists. To offer one example: How to make a living in an environment in which people have come to expect that all content is free — and, in the age of Twitter, when so many are self-appointed experts with their own printing presses (Wordpress) and television outlets (Youtube). But before we get into that heavy stuff, I'll be leading a few people on a sojourn up Niwot Ridge in the mountains west of Boulder. The image at the top of the post is from Google Earth. This is where where we're headed tomorrow. Our ultimate destination is the Tundra Lab of the University of Colorado's Institute of Arctic and Alpine Research, situated at about 11,600 feet. If you've got a minute at about 12:30 p.m. MDT (2:30 p.m Eastern), check out the steerable Tundracam to see whether you can spot us. Lots of research is being conducted up on the ridge, including a project in which infrared heaters are being used to warm up the alpine tundra to simulate global warming — on a speeded-up timescale of months and years rather than decades. One goal is to see how the composition of species in the alpine tundra might change in a warming climate. Another ongoing project is monitoring of carbon dioxide and other gases in the atmosphere. Niwot Ridge, in fact, has the second longest running record of atmospheric CO2. We'll be stopping tomorrow at the sampling site (which is marked in the image above). Here's the CO2 record from the site:

The second longest running record of atmospheric carbon dioxide has been conducted on Niwot Ridge, in Colorado's Front Range. (Image: Earth Systems Research Laboratory, NOAA.) The sawtooth pattern shows annual changes in CO2. But what's most important, of course, is the long term trend. If you squint at the graph you may be able to discern that the rate of increase of CO2 in the atmosphere is increasing over time. You should also take a look at the orange portion of the curve at upper right. The orange color indicates that these data are preliminary. But monitoring elsewhere does confirm what this graph shows: In May, the concentration of CO2 in the atmosphere exceeded 400 parts per million, the highest it has been in millions of years. This is important, of course, because of CO2's crucial role in regulating Earth's climate. Simple physics indicates that the more heat-trapping CO2 is in the atmosphere, the warmer the climate will become. I've been up to Niwot Ridge many times before, so I know what to look for. And I'll be bringing my cameras. So if all goes well, at some point during our retreat I will post something about our trip.