Researchers Discover 1.5 Million Hidden Penguins by Looking at their Poop From Space 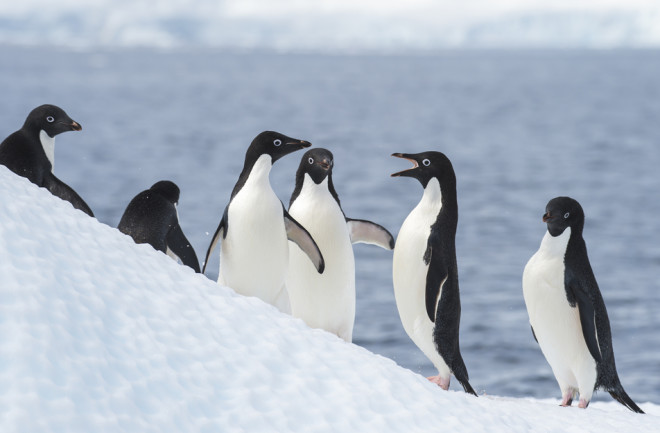 Monitoring the well-being of Antarctica’s delicate ecosystem just got a little bit easier thanks to a very unlikely source: penguin poop.

By analyzing over 40 years of Antarctic images gathered by seven satellites as part of the Landsat program, a NASA-funded team of researchers recently uncovered new details about the lives of Antarctica’s Adélie penguins — a species that may help reveal past and future threats to one of the most unspoiled regions in the world.

In research presented at the annual meeting of the American Geophysical Union in Washington, D.C., on December 11, scientists announced they have pieced together how the Adélie diet has evolved over the past four decades, finding that it surprisingly hasn’t changed very much. Furthermore, the researchers unexpectedly uncovered an enormous, previously unknown population of about 1.5 million penguins located in a particularly remote and harsh region of Antarctica.

To carry out the study, the researchers sifted through Landsat images in search of penguin poop (or more scientifically, guano), which can serve as an indicator of how the penguins’ diet has changed over time. Based on the color of the guano they saw on the ground, the researchers could identify what food the Adélie penguins were eating.

“Penguin guano ranges from white to pink to dark red,” said Heather Lynch, an associate professor at Stony Brook who is also involved in the research. “White guano is from eating mostly fish; pink and red would be from eating mostly krill.”

To ensure their color-based interpretation of the penguins’ diet was correct, the researchers compared Landsat images to chemically analyzed samples of guano collected on the ground. “The team found that Landsat’s views had a surprisingly good relationship between what we can measure spectrally with color and what we can measure in a lab,” said Lynch.

Although the team initially reviewed each image by hand, they eventually relied on a NASA-developed algorithm to flag any pixels that appeared to contain guano stains. By looking for consistent patterns in the poop over the years, the team aimed to tease out a relationship between the penguins’ diet and changes in the Antarctic climate.

But after pouring over the data, the team found that, while the penguins’ diet did change a bit from year to year, there was no obvious long-term pattern to be found. Although this may seem like a bit of a letdown, keep in mind that not uncovering a relationship you expected can be as puzzling as finding an unexpected one.

“It is interesting that no obvious trend in diet was seen over time, despite changes in the physical environment,” said Casey Youngflesh, a graduate student from Stony Brook University who is involved in the research, in a statement. “This was a big surprise, since the abundance and distribution of Adélie penguins has changed dramatically over the last 40 years and scientists had hypothesized that a shift in diet may have played a role.”

An Adélie colony in Antarctica. The ground is stained by their guano. (Credit: gary yim/Shutterstock)

An Adélie colony in Antarctica. The ground is stained by their guano. (Credit: gary yim/Shutterstock)

Although analyzing the penguin poop may not yet have uncovered any deep insights into the Antarctic climate, the researchers did use the stains to spot something else that both surprised and delighted them.

“Male and female penguins take turns incubating the nest. The guano left behind builds up in the same areas occupied by the nests themselves,” said Lynch. “We can use the area of the colony, as defined by the guano stain, to work back to the number of pairs that must have been inside the colony.”

Though previous estimates of the global Adélie penguin population put their number at about 3.8 million breeding pairs, with the help of this newly analyzed imagery, the researchers uncovered a few previously unknown, yet massive populations.

One such group — a colony of about 1.5 million penguins — was discovered in a remote region aptly named the Danger Islands, which is located at the tip of the Antarctic Peninsula and surrounded by treacherous sea ice. According to the researchers, by radiocarbon dating bones and eggshells found on the island, they determined the newly discovered penguin settlement dates back to around 2,800 years ago.

Unfortunately, the team did find evidence that the number of Danger Island penguins peaked in the late 1990s, and it has since declined by about 10 to 20 percent. According to Lynch, this decline “is not catastrophic,” but it is most likely related to climate change.

“These findings are important for our understanding of how the Antarctic ecosystem functions and how this system might change in the future,” said Youngflesh. “Given continued changes in the physical environment and a growing krill fishery in the region, changes are likely to be seen both in the availability of penguin prey and penguin populations themselves.”

By continuing to use satellite data to monitor the ever-changing populations of Adélie penguins in Antarctica, researchers will continue to learn more about both their overall numbers and the health and well-being of their natural habitat.

According to Youngflesh, “Tools such as these will be important for the management of the Antarctic ecosystem, which is often considered among the most pristine areas in the world.”