An animation of infrared satellite images shows the evolution of Nuri into a massive extra-tropical storm. (Source: Space Science Engineering Center, University of Wisconsin) The Aleutian Islands in Alaska are bracing today for a monster storm born of the remnants of Super Typhoon Nuri. The forecast in the westernmost part of the island chain is for hurricane strength winds and waves up to 35 feet high or more. You can see the transformation of the cyclone into an extra-tropical super-storm in the animation of infrared satellite images above. Nuri starts in the extreme lower left corner off of Japan. It's that round, compact object — white at the center and surrounded by shades of red. It then moves to the northeast off the Japanese coast and transforms into a massive storm (look for the big splotch of red) off the Kamchatka Peninsula. Today it's heading for the Aleutians and the Bering Sea. 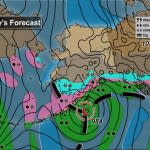 Source: National Weather Service The storm's central pressure is forecast to bottom out at a remarkably low 925 millibars. The all-time low pressure ever recorded in Alaska was 926 millibars at Dutch Harbor on Oct. 25, 1977, according to the Weather Underground chief meteorologist Jeff Masters. With that in mind, Masters says Nuri's remnants are "predicted to become one of Earth's strongest storms on record." In addition to hurricane-strength winds, the monster storm is predicted to kick up waves as high as a five-story building. Here's an animation showing forecast wave heights, with the color pink representing heights in excess of 15 meters, or 50 feet:

Soruce: National Weather Service Environmental Modeling Center Shemya Island in the far western Aleutians will be experiencing the storm's full fury today, with winds forecast to hit 90 miles per hour. The U.S. Air Force operates a radar, surveillance and weather station there, as well as a 10,000 foot-long runway, which was first opened in 1943. The Aleutians are sparsely populated. But may fishing boats ply the rich waters of the Bering Sea. As of yesterday, boats were seeking shelter in Dutch Harbor in the Aleutians. As KTVA TV reported yesterday, "The Saga, a fishing vessel featured on the Discovery Channel’s 'Deadliest Catch,' was in Dutch Harbor on Thursday evening to unload crab."

An animation of images captured by NASA's Aqua satellite shows Typhoon Nuri moving northeastward over the waters east of the Philippines, moving toward Japan, and then transforming into an extratropical storm off the Kamchatka Peninsula. (Source: NASA) Here's one more view of Nuri's evolution — an animation of images from the Aqua satellite. The black stripes are areas with no recorded data. The animation consists of seven images, the first captured on Nov. 1 and the last today.