Record Rain Is Drowning Fields in the Midwest — Is It Climate Change?

Heavy rains and flooding through the winter and spring have left fields across the Midwest too wet to plant. 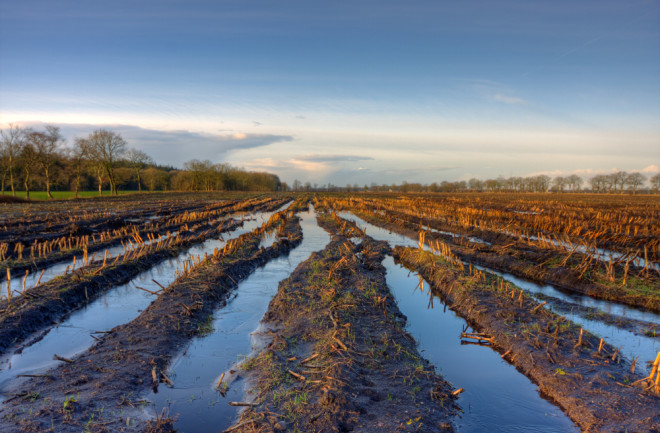 Every spring, farmers across the Midwest take to the fields to plant their crops. Here, corn and soybeans will reign supreme over tens of millions of acres, as soon as conditions are right to plant. Not too wet, not too dry ⁠— just right.

Now, rivers are overflowing, and multiple states are dealing with record-breaking floods. But even away from waterways, soils are so saturated that there’s standing water in many Midwestern farm fields. If things don’t dry out soon, some farmers may miss their planting window entirely and will have to wait until next year to plant a crop.

Emerson Nafziger is a professor emeritus of crop sciences at the University of Illinois. He says this year’s rain — and the forced delay in planting — is out of the ordinary. “I’ve been here almost 40 years,” he says, “I don’t know if we’ve ever reached the end of May with less than half of our corn planted.”

It’s too soon to say whether this year’s crop and flood damages can be attributed to climate change. But one thing’s for certain: predictions for a warmer future have these areas slated for more of these extreme rainfall events.

Usually, by the time June rolls around, 96 percent of our nation’s corn crop is already planted. This time last year, most states where corn is grown had planted their crop for the year, or were nearly there. Last week, though, the U.S. Department of Agriculture reported that only 67 percent of cornfields were planted — and some states, like Ohio and Indiana, were less than a third of the way there.

This week has seen farmers fare a little better, and crops are 83 percent planted. But they’re still way behind, with big implications for this year’s crop.

A map showing the 2019 rankings for regional precipitation. Higher numbers indicate more rain and 124 is the highest possible rank, meaning that this year saw the most rain since records began 124 years ago. (Credit: NOAA)

There are a number of reasons why soils this wet put planting efforts on hold. When the ground is this saturated with water, farmers can’t drive their heavy machinery out into their fields. They’d literally get stuck in the mud.

Even if they could stay unstuck, they wouldn’t want to drive on the wet ground, because wet soils compact easier than dry soils. This compaction squeezes the air out — imagine trying to plant a seed in a block of clay.

What’s more, some of these fields are so saturated that they have standing water in them. That’s no good either, because seeds can’t live underwater.

Farmers would normally wait for things to dry out a bit before planting. But they can’t wait forever. Yields will start to suffer if they plant too late, and they must weigh planting late against not planting at all and filing an insurance claim to cover the losses.

“There’s really a sort of desperation to get this crop planted,” says Nafziger. “A farmer said yesterday he’s never planted into such poor conditions.”

These poor conditions are a result of some serious rainfall. From June 2018 to May 2019, the U.S. got more precipitation than it has in any year since 1895. Concentrated in the central U.S. and eastward, this extra rain has led to soggy fields and major river flooding — the worst of it around the Missouri, Arkansas and Mississippi Rivers.

Is this record-breaking weather a sign of climate change? Not necessarily. More intense rainstorms are indeed one of the outcomes expected from a warmer planet. And climate models predict that much of the U.S. will get wetter under climate change.

But Laura Read, hydrologist with the National Center for Atmospheric Research in Boulder, Colorado, says there’s more to it than that. The real villains in the flooding story are things like continued developments along waterways, urbanization and other changes we’ve made to the land surface that make it less suited to deal with high rains.

For instance, research published in Nature last year found that human engineering of the Mississippi River’s bed, combined with its levee systems, concentrate flood waters in a way that actually exacerbates flood events. In other words, our anti-flood infrastructure makes floods worse.

“We talk about how economic damages are going up every single year because of flooding. But part of that is more people are living in areas that are more vulnerable,” says Read. “We’re not building to the standards that we should be.”

A soggy start to the corn season could mean less corn later this year. Consumers won’t see much of an increase when it comes to corn at the supermarket, but meat and dairy farms are likely to feel the pinch as feed prices rise. It takes a lot more corn to make a hamburger than it does to make a box of corn flakes, so prices will rise accordingly.

Though farmers might not have control over flood-prone infrastructure near their homes, there might be ways they could hedge against situations like ultra-wet springs in the future.

“The main thing about climate change is we can’t make very precise specific predictions about what exact types of changes in the weather to expect,” explains Adam Davis, professor and head of the University of Illinois Crop Sciences department.

“Instead, we should just expect increasing unpredictability and volatility of weather,” he says. “A key thing to think about going forward is how to manage agricultural systems for resilience.”

Some of this new resilience will come from improvements to the plants themselves, as breeders produce varieties that can withstand fluctuating conditions. But more important might be changes at the level of crop systems, Davis says. That means examining which crops are planted, and specifically, how many different crops there are.

It’s like diversifying your portfolio. Corn and soybeans are great at growing in the Midwest, except when spring is too wet for planting. A crop like a winter wheat – which gets planted in the fall, and harvested the following summer – will be grown up enough by May that extra rains won’t cause it any trouble.

Davis and his colleagues are studying the feasibility of bringing a major winter wheat industry to regions normally planted with corn and soy. If it works, he says, farmers with all three crops planted would be less likely to get into trouble from unpredictable weather in any given year.

Regardless of whether this year’s rains and floods can be attributed to climate change, the challenges that have come with them have certainly gotten people’s attention.

“It’s just been very wet across the whole country,” says Read. “I just wonder, will this be — I don’t want to call it new normal, but — the way things move? Will we look back and see this as the start of some period of time where we have more of these events coming through? I don’t know.”