An animation of satellite images showing algae blooming in the waters around Vancouver Island on July 18, 2015. See below for a detailed explanation. (Images: NASA Worldview. Animation: Tom Yulsman) It has been called "The Blob," a gigantic patch of abnormally warm water sitting in the Northeast Pacific Ocean for months. And now, The Blob may have helped midwife a record-breaking bloom of algae stretching from Southern California all the way north to Alaska. More about that warm water in a minute. But first, that giant algae bloom: It consists of tiny marine plants known as phytoplankton, and it is "laced with some toxic species that have had far-reaching consequences for sea life and regional and local economies," according to the National Oceanic and Atmospheric Administration. Toxins from the algae are suspected to have contributed to the deaths of at least nine Fin whales near Kodiak Island, Alaska, in June, although a definitive cause has not yet been determined, NOAA says. There have also been reports of dead and dying whales, gulls, and forage fish in Alaska’s Aleutian Islands, possibly connected to the algae. And over the past few months, according to NOAA:

. . . extremely high levels of an algal toxin called domoic acid, which is produced by a group of phytoplankton called Pseudo-nitzschia, have led to closures of recreational razor clam harvests in Oregon and Washington, as well as closing of large portions of the Washington state Dungeness crab fishery and some of the sardine and anchovy fisheries in California.

You can see evidence of part of the vast algae bloom in the animation above. It consists of satellite views of the waters surrounding Vancouver Island, and off the Olympic Peninsula in Washington State. The colorful image consists of data from NASA's Terra and Aqua satellites. The yellow, orange and red colors are indicative of relatively high levels of chlorophyll in the water. Like all plants, phytoplankton use chlorophyll for photosynthesis, the process by which they use sunlight for their energy needs. The other image shows the same scene but in natural color. I have fiddled with the contrast a little to make the greenish and brownish swirls of algae stand out. 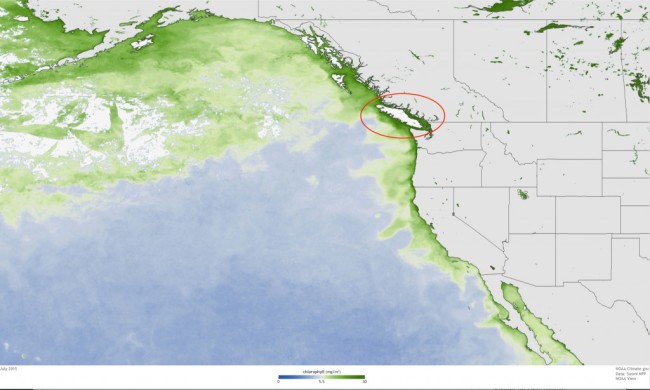 The abnormally warm water suspected as a culprit in the algae bloom doesn't quite look blobbish right now — more like two giant patches: 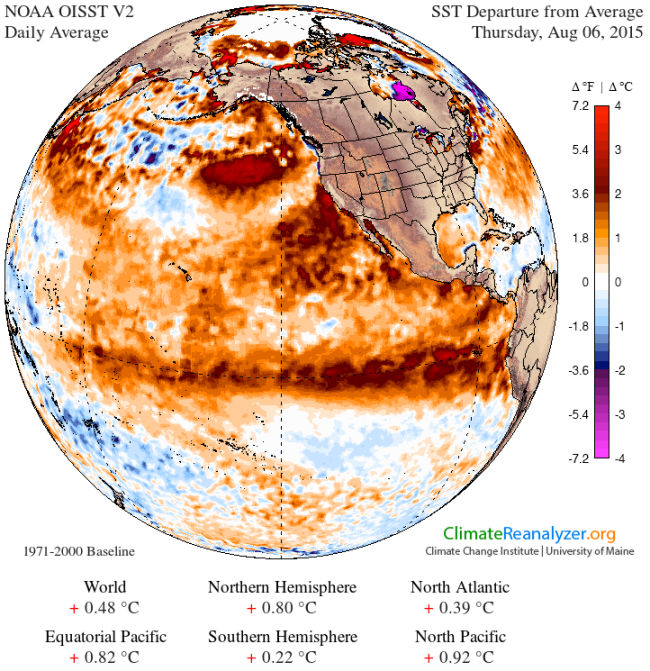 Okay, in the map above of sea surface temperature anomalies for today (Aug. 6, 2015), the warm patch off the west coast of British Columbia, Washington and Oregon, does look blobby. The other one, off California and the Baja Peninsula, is more irregular. (There's also quite a bit of toastiness in between the two.) The warm water has shifted around a bit over the weeks, but it has been a persistent feature for a long time now. In fact, it began forming about two years ago. It also appears to have played a significant role in California's record-setting drought. You'll also note that massive spear of warm water extending along the equator from South America across a good portion of the Pacific. That's, El Niño — and it's continuing to get stronger. It has, in fact, been called a "Godzilla El Niño...

SEE ALSO: As El Niño Gets Even Stronger, He's Not Really Looking Like a Child Any Longer — More Like the Monster of 1997/1998

So there you have it — exploding, toxic algae blooms, a Godzilla El Niño, and The Blob. If I weren't such a weather weenie, I'd be bloody scared... I might add that El Niño and the Blob together like this constitute something that I don't believe has been seen before. And so meteorologists and climatologists have been scratching their heads trying to figure out whether The Blob will interfere with a strong El Niño's typical effects on weather. These include significantly boosted odds for copious winter precipitation in parts of California. Will Godzilla eat the blob? What would that even mean? (And would Godzilla get sick from the toxic algae?!) We'll have to wait another few months to learn the answers.