Raked by Deadly Twisters, Parts of South Remain at Risk 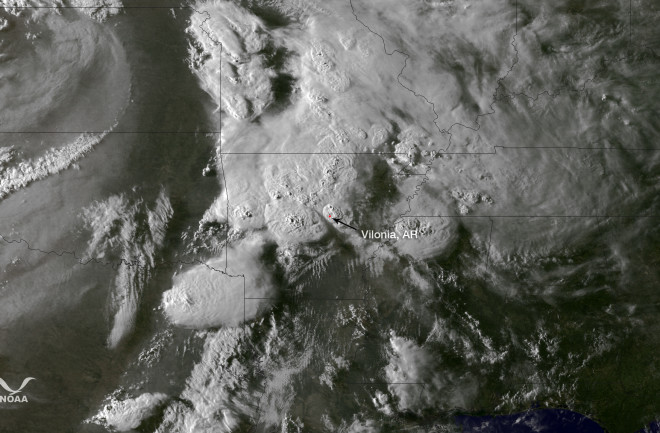 Towering thunderstorms are visible over Arkansas and surrounding states in this GOES-13 weather satellite image. It was acquired on Monday, April 27, 2014 about an hour before tornado reports from the towns of Mayflower and Vilonia began coming in. (Source: NOAA) Updated below with new details on yesterday's tornadoes, 8 a.m. | Damage surveys are still underway as I write this on Monday night, but the National Weather Service reports that the tornado that devastated parts of Mayflower and Vilonia, Arkansas, on Sunday was at least an EF-3. On the Enhanced Fujita Scale, that indicates winds speeds of between 135 and 165 miles per hour. Here's an excerpt from the NWS public information statement on the tornado:

THE TORNADO STARTED JUST INSIDE THE PULASKI COUNTY LINE... 4 MILES NORTH OF LAKE NORRELL. THERE IS AN APPARENT CONTINUOUS DAMAGE PATH FOR AT LEAST 29.2 MILES...NEARLY TO VILONIA...WHERE THE SURVEY WILL RESUME ON TUESDAY APRIL 29TH.

The outbreak of severe weather yesterday spawned multiple tornadoes that killed 16 people in Arkansas and Oklahoma. And today, the South was slammed again, with Mississippi and Alabama being particularly hard hit. CNN is reporting that two people were killed at a trailer park west of Athens, Alabama. And another person was killed in Richland, Mississippi. | Update, 8:00 a.m. 4/29/14: An estimated 50 tornadoes are reported to have devastated parts of the South on Monday. Early reports are that 11 people have been killed. | The image at the top of the post was acquired on Sunday by the GOES-13 weather about an hour before Mayflower and Vilonia were hit. You can see massive thunderstorms billowing up into the atmosphere. To my non-expert eyes, it looks like a good number of these supercells feature what's known as overshooting tops. This phenomenon is indicative of very powerful thunderstorm activity. An overshooting top occurs when the updraft in the core of a thunderstorm cell is so powerful that it punches right through the top of the troposphere and into the stratosphere.

An animation of GOES weather satellite images shows an area of extreme weather developing over the south on Sunday. (Source: NOAA) The animation above consists of GOES satellite images acquired in a wavelength of light sensitive to the water vapor content of the atmosphere. Bright and colored areas show areas of the atmosphere where the water vapor content is high. Black and brown colors are indicative of little or no moisture. The supercell thunderstorms and the tornadoes they've spawned are the result of a strong and slow-moving low pressure system. You can see it swirling over the U.S. midsection in the animation. Here's the forecast going forward from the Storm Prediction Center of the National Weather Service, as of 7:59 p.m. CDT:

A SEVERE WEATHER OUTBREAK WILL CONTINUE THIS EVENING FROM PARTS OF TENNESSEE SOUTHWESTWARD ACROSS PARTS OF NORTHWESTERN GEORGIA...ALABAMA...AND MISSISSIPPI. SEVERAL ADDITIONAL TORNADOES WILL BE POSSIBLE...SOME OF WHICH COULD BE STRONG. LARGE HAIL AND DAMAGING STRAIGHT LINE WINDS ARE ALSO LIKELY. I'll be back tomorrow or Wednesday with more imagery related to this year's first tornado outbreak.