Researchers are concerned about damage the canal could do to nature reserves and wetlands. 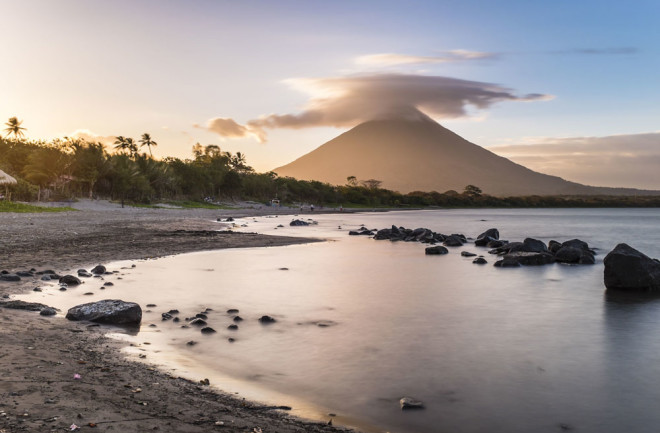 The canal would skirt the southern edge of Ometepe, an island formed by two volcanoes in Lake Nicaragua. | Guiziou Franck/Hemis/Corbis

A century ago, Panama beat out Nicaragua to snag one of the biggest engineering projects of the age: a U.S.-backed canal that would link the Atlantic and Pacific oceans, creating a shorter trade route between East and West. In 2014 — the 100th anniversary of the Panama Canal’s completion — Nicaragua made plans for its own interoceanic linkage, which would be triple the length of Panama’s. If completed, the project could break Panama’s long-standing monopoly on the shipping trade in the region — but at a severe ecological price.

The 175-mile-long canal, which was set to break ground in December, would cut a 1,700-foot-wide swath through two nature reserves, home to rare cloud forests and several endangered species of amphibians, birds and mammals. Designed to serve modern ships with larger hulls, the 90-foot-deep canal also would require dredging 65 miles across Lake Nicaragua, Central America’s largest lake and a key source of drinking water.

“In the scientific community, we’re quite worried,” says biologist Jorge Huete-Pérez of the Central American University in Managua. In February, after Nicaragua announced that it would fast-track legislation in support of the project, Huete-Pérez co-authored a letter in the journal Nature. He warned that the canal, proposed by the Hong Kong Nicaragua Development Group (HKND), would disturb almost 1 million acres of rainforest and wetlands, and he urged the government to commission an independent environmental analysis of the project.

Instead, a spokesman for the Nicaragua Grand Canal Commission announced HKND would publish its own environmental assessment in November. With the company scheduled to break ground just a month later, the document’s timing left little time for public review, critics protested.

HKND says it has hired environmental consultants to offset the canal’s impact by restoring nearby degraded areas. Huete-Pérez is not reassured. “The logic of causing damage in the protected areas . . . to later compensate with reforestation is totally mistaken and has been amply refuted by the international scientific community,” he says.

Even if the $50 billion project overcomes environmental protests, it must still contend with the challenges of Nicaragua’s geology. The U.S. passed over Nicaragua when siting its 1914 canal because of its volcanic and seismic activity. Those geologic uncertainties remain a concern, says hydrologist Bob Stallard of the Smithsonian Tropical Research Institute in Panama City. And the new risk of climate change, which is fueling more intense hurricanes and severe droughts, could mean less than smooth sailing for ships navigating the waterway.