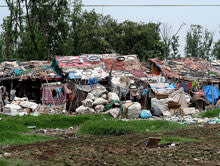 India's capital city has issued a ban on all non-biodegradable plastic bags, effective immediately, although enforcement will be gentle initially. In time however, plastic toters in New Delhi will face up to five years in prison and up to 100,000 rupees ($2,034) in fines. The ban prohibits the "use, storage and sale" of all polyethylene bags of any size, shape, and thickness. If these punitive measures seem particularly harsh, officials say laws already in place that ban all but the thinnest plastic bags have been—like jaywalking laws in New York City—largely ignored in a city that generates about 10 million plastic bags per day. But still, should plastic pollution be a top priority for a country where more than a quarter of the population live in abject poverty (the poverty threshold as defined by the Indian government is $0.40/day)? One hopes that the fines will be targeted to those who can afford them, shoppers at the new sprawling shopping malls and foreign tourists, for example, and not those who live in the slums where much of the plastic rubbish accumulates. Officials say that manufacturers of plastic bags will be shut down and citizens will be encouraged to switch to bags made of jute, cotton, and recycled paper to carry their goods. These plastic alternatives, however, are costlier in the short-run, and many business owners who oppose the ban say customers will have to pay the extra price. Despite strong opposition from retailers, environmentalists ultimately tipped the law in their favor by arguing that discarded plastic bags create breeding grounds for mosquitoes that carry malaria and dengue fever. Related Content: DISCOVER: The World's Largest Garbage Dump: The Great Pacific Garbage Patch DISCOVER: The Dirty Truth About Plastic